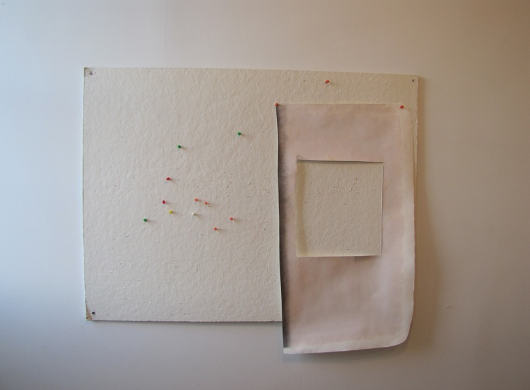 “Twee Abstraction” is a new exhibition of work put on by Tiger Strikes Asteroid that attests to Alex Paik’s great curating. As a rule, I usually condemn when a curator includes him or herself in the show that they’re working on, but this is one of the few instances where rules were meant to be broken. The show includes work by 9 artists, but when entered a priori, looks like the genuinely diverse genius of a single worker. Before I continue, a quick bit of transparency: Caroline Santa, whose work appears in “Twee Abstraction”, was included in a show I helped curate last year entitled “Vanishing Point” with Adaptation, and which was exhibited at Unsmoke.

Anyway, the show itself attends to a relatively small and hand-hewn aesthetic that I find particularly incorrigible, bemusing, and ultimately endearing, appropriate in it’s lack of acknowledgement of visual ephemera. Every object, whether painting or sculpture, has a utilitarian intimacy that makes me think, as ludicrous as this might sound, that if kept on one’s person, it would in someway provide aid during an apocalyptic scenario. The room seems to decipher itself and its viewer in as tacit a way as possible, providing the objects inside (and the objecthood of each individual work is so important) with clues to their everyday usage. Tamara Zahaykevich’s “Pumpkin Queen” seems like a maquette for some bizarre protrusion to inhabit, camouflaged as the sunset on a deserted beach. Lauren Collings “Captain Bunc” stands out as being the least geometrically devised construction in the exhibition, and makes me think it’s the product of a spiritual leader’s vague assertion that there is a God and this is what it looks like. Jeffrey Scott Matthews “DLTA SQNC (RED HEX)” is the quotidian reminder of order. Caroline Santa’s “Bulletin Board (c. 1984, original thumbtacks left untouched), with pink viewfinder” becomes the undecipherable codex that is both proof and reminder of the existence of independent thought before your time. Each artist contributes, but I won’t tell you more because you must GO GO GO! A lot of abstraction shows miss the mark by being more about the individual works than about what abstraction can holistically contribute to one’s sense of experience. This is not the case here. Again, GO GO GO! to see “Twee Abstraction” at Tiger Strikes Asteroid before it closes January 29th. I’ll be back for this and the GRIZZLY GRIZZLY show before then. What exciting shows in such close proximity!