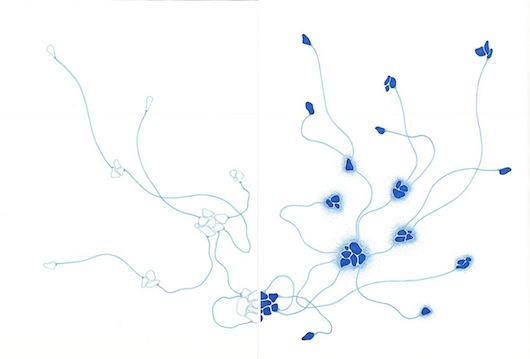 Dar Meshi studies how we make decisions.  His works, like minimalist modern art maps of some complex cognitive process, seem to reflect that.  Whether that is a free association or a conclusion influenced by the awareness of his field of research is likely best answered by the Berlin-based scholar himself.

SOME OF YOUR PIECES LOOK ARCHITECTURAL; GEOMETRIC. SOME LOOK LIKE THEY COULD BE ABSTRACT DIAGRAMS OF SOMETHING SCIENTIFIC… CRYSTAL STRUCTURES, NEURAL PATHWAYS, MICROSCOPIC SLIDES.  HOW MUCH OF YOUR ART IS INFLUENCED BY YOUR RESEARCH AND ACADEMIC PURSUITS?

I’m a neuroscientist currently studying how we make decisions in social contexts, so I’m thinking about this stuff all the time and it comes out in my drawings.  For example, the most “neural-looking” drawings actually started out as representations of social constructs in our society and how they relate to each other. WHAT IS YOUR FAVORITE WAY TO DRAW? TIME? PLACE? MATERIALS?

My Bedroom. Pen and Paper. I work for 10-15 minutes then take a 3-5 minute stroll around my apartment. Repeat. ANY PARTICULAR ARTISTS THAT INSPIRE YOU? I was a bit wild when I was younger, but I was also pretty nerdy as well.  I didn’t like being in class (only realized this as an adult) so, I was often disruptive.  This resulted in my peers either liking or disliking me, and the administration constantly trying to discipline me. IS IT EASIER FOR YOU TO ABSORB NEW CONCEPTS BY DISCUSSING THEM WITH OTHER OR STUDYING PRIVATELY?

Hands down, discussing with others.  I have a fairly short attention span, so one way I’ve overcome this is by learning key concepts in a short period of time and then talking about these things with my friends and colleagues. WOULD YOU RATHER BE ENDOWED WITH THE ABILITY TO SPEAK EVERY LANGUAGE FLUENTLY OR POSSESS A PHOTOGRAPHIC MEMORY? DESCRIBE THE CONCEPT OF TIME IN 4 WORDS: WHAT WAS YOUR FIRST PIECE OF ART TO MAKE THE FRIDGE?

I can’t remember the first piece, but when I was really young someone showed me how to draw deer by smudging pencil marks with my fingers. Many a deer ended up on the fridge. HOW LONG DID IT TAKE FOR YOU TO DEVELOP YOUR OWN STYLE?

Quite a while.  I used to be obsessed with realism and it took me many years to let that go and enjoy abstraction. ARE YOU SOMEONE WHO REMEMBERS THEIR DREAMS?

I used to be.  Now, I often confuse dreams and reality… the older I get the more they blend together. WHAT WAS YOUR LONGEST STINT LIVING IN ANY ONE PLACE?  HOW HAVE THEY INFLUENCED YOU, RESPECTIVELY?  DO YOU THINK YOU’LL STAY WHERE YOU ARE, COME BACK TO A FAMILIAR CITY, OR GO SOMEWHERE NEW?

I lived in New York City for 10 years and it was by far the most influential.  I had struggled my whole life to identify myself as either a creative or a scientist.  In New York, I realized that the two aren’t mutually exclusive. I’d love to live in NYC again, although I’m pretty happy currently in Berlin. Any other major metropolis would be great as well.

YOUR LIFE IS A MOVIE- WHO IS THE DIRECTOR?  HOW IS IT RECEIVED?

Ah, I like this question. Would love it if directed by David Mamet or Woody Allen, but in reality it’s probably directed by Paul Verhoeven. After watching people’s first response would be to ask, “Why so many bathroom scenes?”

Get curious, get passionate and enjoy life!