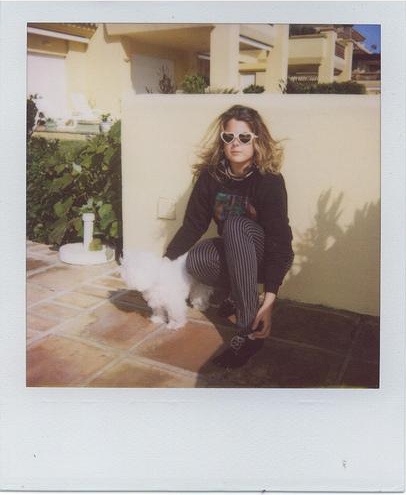 Gala Knorr doesn’t listen when you tell her that a portrait painter can’t be a Rock n’ Roll DJ. Or that a Rock n’ Roll DJ can’t be a cross-dressing, fantasy photographer. Or that a cross-dressing, fantasy photographer can’t be an experimental music documentarian film maker. Stick to one thing? Get out of town. Whether on the mean streets of England, Portugal, Spain or in the States, Gala ‘Bohemia’ Knorr whips up the wind of familiar good-times with her ever-present aura of youth and vibrancy that staunchly holds a certain reverence for the nostalgia of yesteryear. She doesn’t let you forget, ever. And that is why knowing her and her work is to know a style of living that lies just beneath your skin. Your work is totally down with the kids, stressing the aspects of nostalgia for times of which can only exist in our minds. How do you nurse the spirit of the past to feed our suckling youth?

We all dreamers look back for inspiration and something to instigate our true wishes. Mine was to experience a time I felt deeply connected to through the knowledge I acquired during the past years of my life. Past youth of the sixties in which so much change was provoked and fought for has left a long long shadow that we now have to live under. I understood that by looking at the past I should know best to not repeat my own mistakes, or the mistakes that others have done before me. Youth today needs to expand the horizon that previous generations had set, and come out the shade. It is something extremely hard to be made out of bright colours in a world that gets so grey. You use your friends as a starting point for a lot of the things that you do, they are obviously important to you and form the basis of much of your artwork. How involved are they on the process of creation?

When I lived full time in Paris, my friends would pass by the studio I shared with other peeps to hang out, sit on the couch, draw, paint, do their homework etc… It was always nice to have a non-blood related family in the city that adopted me, and made me the artist I am today. A person can discover many things about your persona just by interacting or seeing the people you surround yourself with. I have always been attracted to those who make a difference, not just their actions but their personality. I don’t like those who don’t surprise me in anything, I like the ones that don’t say a common place thing, that can help me construct myself into a better person, I like people who are free while a lot of others would be scared of them. My friends are part of me and my work, but they don’t really take part in the process of creation, they are an inspirational fountain of authenticity.

Music penetrates your consciousness and flows out of your work as a result. You call your work an on-going mixtape where each piece represents a single song. Does your mixtape embody the’ pre’ or ‘after’ party? And what tunes are on there? How does your musical inspirations express themselves in your work?

Music has always been a big part in my life, when I was a little girl my dad used to play Rat Pack records, Kinks, Hollies etc at home, when I was 8 I knew tons of Frank Sinatra songs by heart and I did not even understand English. My mum was always more into Latin American and Spanish music because it was what she could understand, but she has some fine funk and soul records in English that we blast in her car every time we go grocery shopping. It was only a matter of time for me to be interested in music. I don’t think my mixtape is the “pre” neither the “after” party, the “pre” party mixtape has been done by others, probably by predecessors I admire and it probably contains tons of be bop, jazz and classic rock. I think I am still working on the now, the present mixtape, there will be someone doing the “after” party mix while I get my sweet sleep. When I had my first solo show in Paris, I called my work a mixtape because mainly during the year I was working in those gigantic paintings in a studio I shared with 5 other great gals who as me were painters, I always used to choose the music we’d listen to. It was funny to see how everyone’s mood changed with the music making us paint so differently. I remember this one time, must have been an early Saturday morning immensely hung over. I was at the studio with my Russian artist friend Eleonora Grokhotova, I put on Pink Floyd’s “Wish you were here” album, and I think we both seriously started to levitate and paint in the lightness of a sound that surrounded us with warmth. Another time while I was working on a 2 by 2 m self portrait I got a hold of my Yardbirds cd and played it real loud thinking no one would care, I was alone and all of a sudden one of the professors from my school violently opened the door and screamed “DID YOU KNOW THIS IS A DYLAN SONG?”, and then stormed off. In modern history music has been a form of art that represented the free spirit of the young, I wanted my work to captivate the free spirit of the young today, I wanted my paintings to become the epitome of free spirit through colour, shape and ambiance. If I had to make a new mixtape to represent my upcoming exhibition I think it would contains a lot of 60s garage rock and blues. This is making me want to listen to “Back door man” of The Doors real loud right now.

What’s up with Bob Dylan?

Oh man Bob Dylan, he is probably one of my favorite people ever, just because throughout the years (I mean the man is the age of my father), his art has stayed flawless. Granted a few of his albums have been weaker but to me Dylan has been almost an artistic father figure, and he is not even a painter or a video artist you know what I mean? I discovered that art was not only a way to make a living, but it was a lifestyle we all shared no matter what shape you art was. I remember in the beginning when I started getting into more 60s rock and roll music in my London years in High School, I could not understand why someone would want to listen to Bob Dylan. Not to mention at that point I was pretty obsessed with Jim Morrison. Me and my friend Sylvia aka DJ Sylvania (who lived and studied in the same school as me) had this stoned fantasy that when we died we would hold hands with Jim, frolic around and become part of his harem of angels. Once I moved to Paris, my English got better, and I started spending time with artist Kate Finnegan-Prans. She was a clear example of neurotic New Yorker, but thanks to her I got a copy of Highway 61 Revisited and my opinion seriously changed. We would spend time in her tiny apartment in Le Marais listening to Dylan having coffee, and talking life. At that point I was fluent in English, and spent serious time listening to the lyrics more than the melodies, to soon find out that Bob Dylan had written songs that could apply to many of the anecdotes and experiences in my life. That maybe one day I would get the chance to invite him over to my studio here in Spain, make some coffee with vanilla milk and talk life. Papa was a Rolling Stone

You’re Djing for Harley Davidson now and touring around England. What’s next for Gala Bohemia?

My last Harley Davidson soirée was in September, same month England and Wales. ‘Gala Bohemia’ (my hopeless romantic alter ego) is gonna take some time to work on new projects. I just packed my “Los Subterraneos” drawings and showed them in my second solo exhibition last month at the exhibition space Paulo Freire in Vitoria-Gasteiz in the northern Spanish region of the Basque Country. Now, I am participating in a couple of short film fests here in Spain and Portugal. And hopefully after that I will get a little time off to go to the US and Paris to check on old friends, play some gigs, find new inspiration, see new art and feel the vibe of the big city away from the tranquility I live in by the sea!