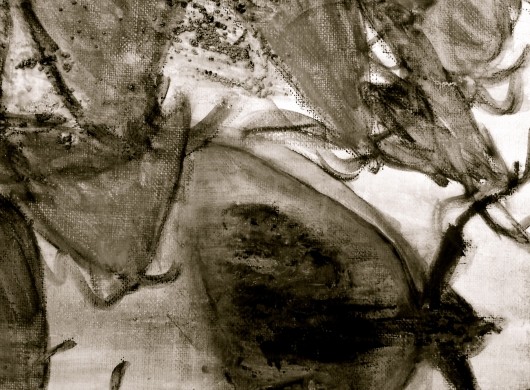 Our friend Daniel Goldberg of Spookfish recently unveiled a modest kickstarter project, designed to help him press his most recent recordings, Moth/Butterfly, to vinyl. I say modest because there are no astronomical demands for astronomical rewards – $200 gets you your own song. He’s even guaranteeing to “put considerable thought/time into it.” Last week I spent some time emailing with Dan so that we could try and highlight the project, which as of now is a third of the way to its goal at around a third of its lifespan. If you’ve got a chance, check out the project here and listen to “Touch,” available for the first time anywhere off Moth/Butterfly.

I know you’d been living in South Korea for a while and traveled through Mongolia on your way back to the United States – how much do the songs on Moth/Butterfly find their creative nativity in those locales?

I am not a native of either of these countries, and I’d like to think that everyone’s music is a reflection of their nature and their subconscious. Perhaps that sounds really out there, but no one can describe why patterns of notes and rhythms rouse emotions or strength out of us any more than they can describe why it is that we dream. Music is a mysterious thing to me. I would hate to say what it means or what it is or what place it comes from. I will say that I was feeling a lot of strength, disorientation, detachment, and nostalgia from these places when I made this music.

The experience of living in Korea made me feel really strong but also sometimes pretty lost. I definitely felt the pull of conforming to a group culture, one with often way different priorities and ways than those of the people I knew back home. This challenged and changed me a lot. I also saw so many things there that amazed me that I never thought I’d see and felt proud of that. Also, five months after leaving the country and beginning to make this music, I was still missing my life and roots I had planted there horribly, sometimes I couldn’t talk about much else to people.

In Mongolia, I was just being shuffled around like a tourist really. I was actually pretty paranoid and stressed because, being in Ulan Bator, it was my first time in a year where I had to think about getting mugged or robbed. I was able to spend a few days on the steppe and see how powerful, beautiful, and harsh the nature was there. I felt a really intense admiration/jealousy for the historic culture that could survive there and celebrated it, which is something that I still definitely feel.

It sounds like there’s been some tension between you and these adopted, temporal homes. How do you see your music in relation to your real world transitions? Are there substantial parallels?

In my first music that I made when I first moved to New York and had just finished college, I was feeling all of these really strong, overwhelming things and I think it was a result of leading a life that was more linear and seeing the same people often for years at a time.  I really wanted to hit people over the head with the music and it all sounds very close, bright, and warm to me.  I am pretty convinced that, at a show, when I play these songs correctly(and the volume is high enough), I am able to dump all of this on the audience whether they like it or not.

To me, this new music has more of a distance to it and also feels a bit darker.  I think people could listen to these songs at a quiet volume and I wouldn’t be offended.  It is actually something I worry about, it is certainly different, but the songs wrote themselves for me just as they did before so I need to run with them.

It takes a long time to establish yourself somewhere and find your place and your group of friends.  I’ve definitely learned the value of this from running all around.  It always feels like things are finally coming together and then I leave the place to start somewhere new.  There is a lot of value in running around as well and it opens up a lot of doors and ideas, but I’m really longing to remain somewhere for a few years at this point.  I’ve been constantly picking up and going and starting over, being isolated and confused, with only a couple of familiar people around.  I definitely think this is somewhat responsible for this distance I feel in the music.

In that case, what kind of expectations do you have about the evolution of your music and get closer to some kind of permanent situation?

I really, honestly, don’t even know where I’ll be two months from now.  Even though I’d love to be in one, a permanent situation seems sort of unfathomable right now.  Still I know I can make it happen and I also am extremely lucky to have many homes and dear friends and family all around the world.  I do know that in a permanent situation, I’ll probably be able to accrue more instruments and recording equipment.  All of this music was made on a makeshift drum set that was left in my garage(owned by a musician known as ‘The Westerner’) and one keyboard.  Side B was actually recorded on a 4 track tape because I broke my power cable to my computer and was too broke to replace it.  I actually loved this setup and I certainly am not aiming to collect a bunch of expensive gear or make music with state of the art production, but I would definitely like to have more textures at my disposal in the future.

As far as the feelings that my music will give off, I have no idea.  I’ve done a lot of growing as a person in the past couple of years(as everyone does) in ways I never expected that I’m sure will stay with me forever and somehow always affect my music.  Side B was made after side A, after being in Portland for a few months, and it already feels warmer and less distant to me, but it still brings me back to all kinds of different memories.  There are still a lot of ways that I need to grow in life and a lot of things I need to learn that I am pretty lost on now.  I can’t say how it will feel or what kind of music will seem right.  I just know that I’ll always be making music regardless of what else I am doing in life.