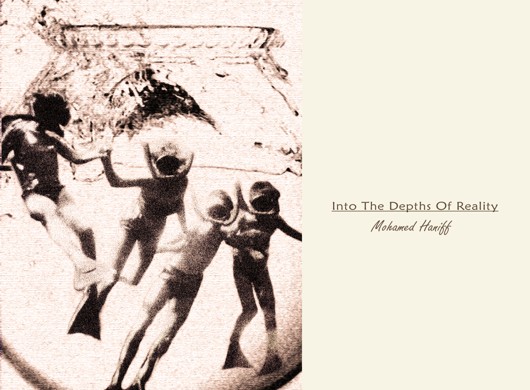 Very little is known about beatmaker Mohamed Haniff, but don’t confuse him with the musicians wrapping themselves up in mystique nowadays in hopes of a blog post or a twitter mention. Haniff is content with what he’s doing and if someone chooses to write about him, so be it. That’s the kind of attitude I’m a fan of – especially in a time when everyone scrambles to be heard or recognized by the right person. Haniff just put up a new EP on his bandcamp, Into the Depths of Reality, which you can pick up for free here. I thought it’d be worth a minute to stop and pick his brain to get a little perspective on his patient, spatial production.

I kind of want to just ask your life story, is it possible to give us a nutshell version of Mohamed Haniff – the artist and the person?

Mohamed Haniff the person in a nutshell is a 21 year old guy who spent 18 of those 21 in the small island of Barbados.  I was always kind of a music fanatic and I began to dabble in guitar but I never really found my voice on the instrument.  I moved to Canada strictly for school but it really opened me up musically, in University I met a lot of people who were DIY musicians and that really motivated me and inspired me to do it myself; though it took me a couple of years to figure out exactly what I wanted to express of myself – and how I wanted to do it.

And you moved to Ottawa, how’d you end up studying there?

What’s some music that’s burning a hole in your iPod right now?

How would you describe your sound or at least the sound you’re going for to people?

The sound I’m trying to get across is very atmospheric. When I was first getting into music the concept of spacing was drilled into my head and I think that it’s always stuck with me.  My records are very spaced out or at least I try to make them that way, it’s just what I enjoy hearing.

When is your favorite time to work on music and why?

My favourite time to work on music is probably late at night.  It’s a very serene time and I feel the most relaxed at this time.  The day’s over and everyone’s just kind of winding down, I feel like my brain is more relaxed and loose at this kind of time.  I usually start working on ideas late at night to be honest, probably between like 10pm and 2 am is my favourite time to listen to and to work on music.

What can we expect from you in the future, album? Any thoughts on live performances?

In the future I want to work with a few artists if all goes well.  I’m also gonna be working on a full length album for sure, but I want it to be perfect obviously so I’m not too sure when it will be released. I’m looking to get a few features from young talented dudes instead of it being fully instrumental.  In terms of live performances its something that I am aching to do.  I got a taste of it recently and it was really a ton of fun, so its something I really hope I get to do more of.