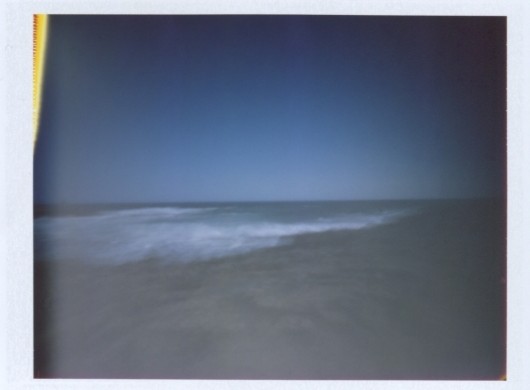 Standing in London’s Victoria Park aiming a shoebox at a tree is how I imagined I’d eventually spend my twilight years. Far from being a premature shove towards senility, this was a learning experience that the dreamy abstraction of pinhole photography must also be mirrored in its practice. Yet knowing you only have one shot to get it right and spot your conditions carefully charges the whole event with the thrill of a hunting trip tinged with an elongated sense of artistic purpose. Photo-artist Sarah Roesink has spent the past few years refining the art and technicalities of pinhole photography, creating a collection of wistful and wonderful images. LAND spent the day with Sarah building a camera from scratch, developing photos in a bath and eventually snatching an excitable sense of achievement from an overcast afternoon. She then shared something of her love for the art form.

What subjects do you approach in your pinhole work?
I have quite a few projects that I have on going. One is taking self-portraits. Because the exposure time is so long, you can create these images that are double exposures. You can do that with any other camera of course, but I like to try and work differently with these disadvantages you have, like the very long exposure, and working with that to make something interesting. Are there subjects you avoid?
It’s very difficult to take a picture of people because they have to sit still for a very long time. Something that is a bit of a danger in pinhole photography is that everything looks kind of cool as it’s a pinhole image; it’s a bit distorted, slightly blurry, so it’s quite difficult to find the right subject that you photograph. So it’s more about the subject not about the pinhole image; working in the subject matter itself. Is there something about pinhole photographs that can’t be recreated by any other means?
I think everything we produced today, you can’t recreate digitally, it’s just not possible. I think it’s the mood in the images; even with the black and white images, they have a very special mood because the light is very special. Also the way you make the image effects the image, because it’s a very slow way of taking a photograph and you’re making your own camera. So you have a totally different engagement with your camera, with the subject you photograph and you as a photographer have to work totally differently. Is the difference more in creating the image than the image itself?
If you have a digital camera, I feel that – I’m not speaking for everyone – I don’t think as much before I take a photograph, but with a camera like the one we produced today you only have one shot and you have to go out and you have to get something that looks right for you. So you look harder to find something that looks interesting. You don’t just go out and shoot, because you can’t physically. Are there many people progressing the medium forwards?
I don’t look at any pinhole blogs or research it on the internet, I’m just working in my own little bubble. But I think I’m just trying to use a pinhole camera like I would use another camera; to use it in kind of a normal way. Why would you say that is?
I think because all the digital stuff that surrounds us is not tactile. Producing something just makes people happy. We’re just not in a ‘making’ era any more, you don’t really make stuff yourself, it’s so nice to make something with your hands. So it’s an advantage of pinhole photography, or anything that involves your hands, and actually producing something. It’s a bit like eating chocolate; you make something and you produce something at the end of the day, and you go home with your own camera and the prints that you’ve developed, it’s an achievement. I think with all the digital stuff around us, we don’t have the achievement feeling anymore and that sense where you actually have something physical in your hand. That’s what I observe in people through doing the pinhole workshops, it just makes them really happy! For information on future courses, and hosting a workshop in your own premises, get in touch with Sarah via her website.