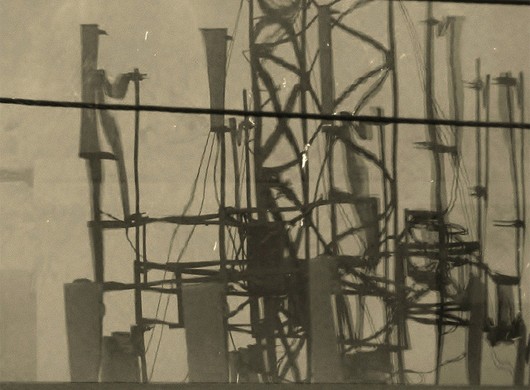 “the work in progress #001” by mattjudas The July 2011 ‘Pictures Of the Month’ are curated by Panayotis Ioannidis; an award winning poet from Athens, Greece. About his curation, he says;

The instructions, accompanying Land’s kind invitation to select some images for this month, were clear: “Please restrict yourself to recently viewed images”. I additionally decided to restrict myself to photographs –as opposed to other kinds of images– and then, only those that I had already chosen to appear in my flickr galleries. (This regrettably meant leaving out images whose makers do not allow inclusion in galleries, as well as older images of artists whose work I admire.) In choosing these 18 photographs (18 being the number of images allowed in a flickr gallery), I also decided to replicate the way I build up my –themeless– galleries: by simply, sequentially adding images that strike me. However, invariably, these images end up forming a ‘chain’, or an unplanned ‘narrative’ of sorts: linked through constancies and variations in pattern, mood, subject, colour – as if the mind keeps a silent, enduring track record (since it may take me several days or weeks to complete a gallery, and I do not review its existing content before adding new one). Very rarely do I need to re-organize the sequence of images in a certain gallery, in order to make its ‘narrative’ speak in a clearer voice.

Only recently did I realize that this mode of work is similar to the way I take and organize my own pictures– or, for that matter, my poems. Spontaneous note-taking –whether of words or images– provides the material from which images or phrases will eventually be selected. Their sequential accumulation then reveals relationships that were not consciously sought after, but that may now form an organizing principle: for sets of photographs, or for a poem knit of phrases. A final layer of ‘organisation’ (that I flatter myself by likening to musical or architectural composition) may result in a “collection”, of images or texts.

After selecting images from my flickr galleries from March onwards –from the beginning of a strange Spring, up to this ongoing, dubious Summer–, and looking at them again and again, a phrase surfaced: “Uncertain traces”. There is of course nothing more certain than a trace: a physical alteration of a pre-existing surface. And yet, its provenance, its durability –let alone its “meaning”– are very often beguilingly uncertain.