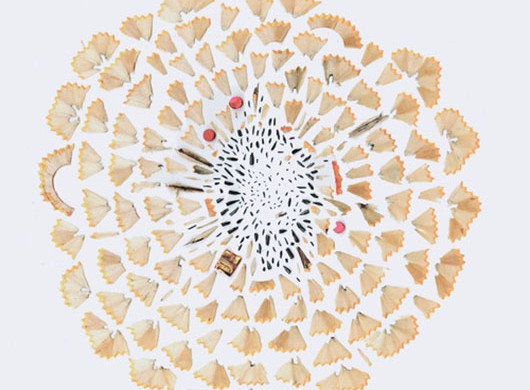 Visual and typographic artist Sam Winston produces works of staggering detail and organization. His work deals largely with language and communication (how we perceive words and what they really mean). He often takes things or concepts that people don’t necessarily spend much time thinking about anymore (pencils, Romeo and Juliet, the dictionary) and cuts them, organizes them, and places them in a way that communicates their intent and purpose visually instead of literarily. The above photo is a close-up of Winston’s piece titled Birth-day. Each tiny hand-drawn circle represents a birth or death that occurred (statistically) over a twelve hour period. While he originally wanted to create the piece in real-time, Winston soon realized the impossibility of that; it took him many months to “capture the rhythm of life and death”. Winston created silkscreen prints of the body of Shakespeare’s Romeo and Juliet, first separating all of the text into three categories — lines spoken in rage, lines spoken in passion, and lines spoken in indifference. He then cut up those separated texts and collaged them into visual representations of each emotion (Indifference is still in progress).