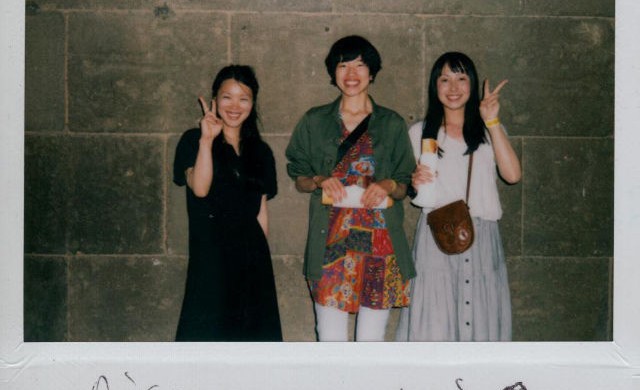 Battles played at Emos Austin last Friday. Nisennenmondai opened for them and I almost have to say that it was better than seeing Battles. I say “almost,” because I don’t want extreme Battles fans to stone me to death. Nisennenmondai are three incredibly cute girls from Tokyo who simply know how to rock. Himeno Sayaka plays drums, Zaikawa Yuri plays bass and Takada Masako plays guitar. Let’s get to the point: Shit gets real when they are on stage. Himeno is a powerhouse on the drums and is the main reason I would recommend anyone to see Nisennenmondai. There isn’t a moment when her head and arms aren’t flinging around intensely. Nisennenmondai mostly plays instrumental noise rock. There is a lot of repetition, syncopation, and build up to their tracks. Midway through their first song they played, I felt like I was a victorious hero going on my own hero cycle. If you’re having a shitty Monday and you can’t seem to win, turn the volume up and jam to Nisennenmondai.