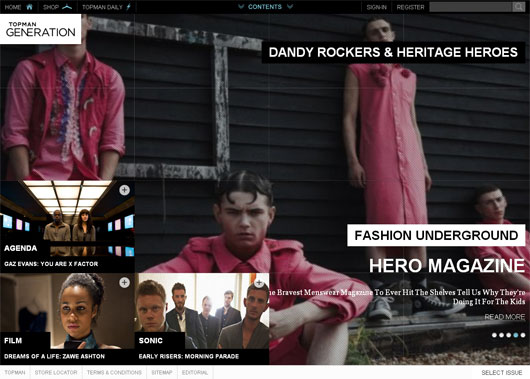 This is really the first website review for LAND and I thought I’d start us off with a newly launched magazine that is headed up by a friend and all around good guy. So remove from your mind the fact that this is a magazine run by a multinational corporation and let’s focus on the design and content.

I was immediately impressed use of huge eye candy to engage and inflame the senses, but the navigation is the thing that made me want to take a bite out of this site. I work on the internet, and so am always looking for new ideas (to steal) in my web design and I just found one on Topman Generation. The static background on which lies a variable box of content with large up and down buttons somehow makes the viewer feel as though they are reading one of those plastic newspapers that they kept talking about in 2008 and still haven’t fully launched.

The code is simple and clean with clear breaks and an easy structure (OK, that was the most nerdy thing I’ll say, promise) and the lack of vertical scrollbars somehow compliments the bare quality of the image heavy frame.

Topman Generation’s content focuses on art and film with smatterings of fashion (well, how could they not?) and music. The artists interviewed and featured are usually big names but they seem to slip in some relative unknowns (at least outside of London) here and there which makes for a nice melange of pop and subculture topics. Simon Jablonski is the film editor (along with his many other roles such as interviewer and copywriter). I’ve always enjoyed Simon’s writing style which is succinct and complimentary to his topics. He’s a true blooded wordsmith and also one hell of interviewer who has a very straight forward approach and actually listens to the interviewee which makes for a nice write-up afterwards (and I still say that even after he interviewed me for Dazed and published I was from Texas which I’m not… not that there’s anything wrong with being from Texas…).

BTW keep an eye out for Mr. Jablonski, he’s got a short film coming out called ‘Chips and Blood’ which has been chosen for the London Short Film Festival. He is a man with many talents who runs a slick website (no he didn’t pay me to say that… though that would’ve been nice). You can find Simon on his Twitter account @simonjab