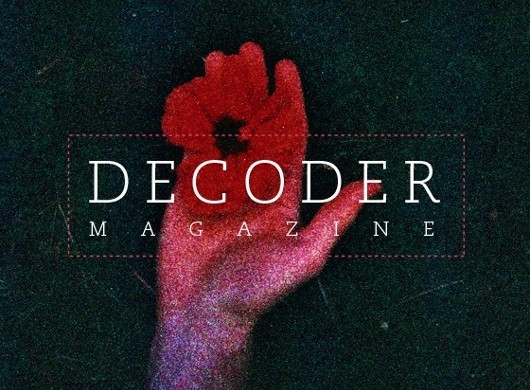 Decoder has been (like all good things), a long time coming. I remember Dwight talking about it last year and I couldn’t help but think how much he sounded like me when I wanted to do the first issue of LAND… totally motivated and obsessive (a good way to be mind you). A few months, a lot of contributors, some great work, a gorgeous mixtape and a wedding later, finally we have the Decoder Magazine Issue 1 Kickstarter for all to cuddle.  Read a bit more about the mag, go to the Kickstarter page and pledge a few bucks of your lunch money and get in on the ground floor of several of the most talented kids in music and art publishing today. LOVE YOU GUYS.

Decoder Magazine is foremost an attempt to interpret a world of culture and media in which the preeminent players have been the newly liberated human and the ambitious constellation of niche communities that new resources have given us digital beings unparalleled access to. Never before have so many human beings had so great a will to curate the universes around themselves or been as well equipped for it. Discussions of good and bad art have, after a long unfashionability, been replaced by tension over the means of popular access, new systems of personal art advocacy, and a growing sense of what exactly drives successful creative communities. We believe that society’s new emphasis on personal curation will grow as more gain access… to the internet, to resources, and to new behaviors. Through selected essays and prose, poetry and interviews, and a variety of multimedia features, Decoder hopes to follow the vein of humans who transcend momentary fashions, creating timeless novelties and monuments to the menagerie of human perception.
Decoder is an outgrowth of Get Off the Coast, a North Carolina music blog that expanded its cast of writers over 2010 and 2011, becoming only one part of a larger, homespun arts collective that also runs tape and vinyl label Crash Symbols and participated in Pitchfork Media‘s ensemble music blog project Altered Zones, before it’s dissolution late in 2011. In 2011, the editors and writers at Get Off the Coast concluded that it was important to reconceptualize – the name “get off the coast” was itself a moniker that mostly referenced entirely temporary conditions – and Decoder is the result. Mixtapes as a phenomenon find their impetus in infinite variations on human and social themes. You can make one for a friend and feel good about having gotten to turn someone on to a particular band or they can be hollow, fatuous promotional tools. Although we can’t claim to be your neighborhood music hook-up and we can’t deny thinking that it’s in our best interest to showcase music we think is great, we think what these musicians are doing, as much as our content contributors, is important. This and all future issues of Decoder will include a free digital mixtape – digital because, despite our conceits about format, we’re even more conceited about making great music accessible. In any event, we love making them… if you want a sense of what this will be like, check out another we recently did with French digital imprint Beko-DSL… you should probably check them out regardless, actually.

For our inaugural mix we’ve inclined towards the eclectic. You may recognize some of the names on the list below, but we wanted to emphasize early on that these mixtapes will entail shared discoveries. We found new music mid-assembly, just like we hope you will. They’re all exclusive tracks, so you won’t discover the particular songs (at least), anywhere else.