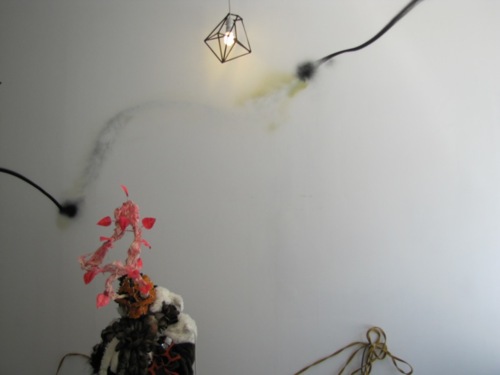 Kline’s work is a refreshing move away from Templeton’s last show. He has the magpie aesthetic in full swing, but instead of the rabid neo-Duchampean mindset that some people blindly approach found objects with, he does it intelligently and deliberately. The show is an easy read, which is refreshing for one of the more forward-moving galleries in Philadelphia. I like difficult work with all the twists and turns you have to take in understanding it, but it is such a simple pleasure to see good work done well. What flows into the sewer drains on a Philadelphia street? Leaves! Weaves! Pigeon Feathers! Wood! Waste! Cans! Flowers! Traffic Cones! Kline uses all of this detritus and more to construct his astronomical delights. It’s as if a group of molemen dwelt below the surface of our city and had to decipher some sense of the world above by constructing totemic effigies from the waste and orient them in a bizarre spatial system. Many of the works are physically separated from each other but there is an interplay that allows the entire exhibition to become a wonderful and cohesive environment. His few spray painted lines on the wall highlight this tenuous connection by being abstract dots and strips that float along, much like a bizarre celestial chart.  All the time they act as separate visual entities, but are undeniably connected.

One of my favorite uses of materials in this show was tin cans hanging from string in the work “Tin Can Folklore”. It might be completely unintentional and a byproduct of looking too closely, but the use of tin cans on string and the rudimentary communication they can provide makes me think of a “landline”.  Kline also drives home the concept of a divide between the society that created these objects and the people who are making sense of it through reconstruction by using an old 8mm projector.  Without any film to project, it hums quietly along pointed at a small sculpture.  Behind said sculpture it casts its shadow that has none of the original depth. Plato’s cave! Bam! Kline’s “Celestial Subterrane” runs through April 21st at Rebekah Templeton. I’ll definitely be back to have another look. I’ll also be thinking about molemen for the next couple of days.