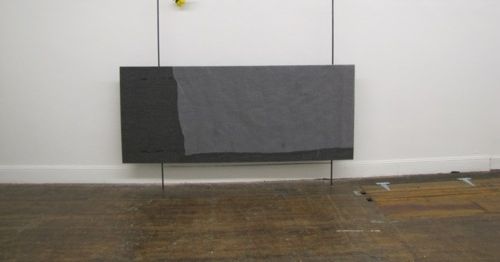 Ben Schumacher and Elaine Cameron-Weir (BSaECW) have created something at Bodega gallery that leaves me in awe.  I’m not sure how to describe it, but I’ve tried to a dozen times since our first encounter at the beginning of March.  I haven’t written about it until now because I wanted to go back and visit again, just to see if the mystery was still there – it was.  I decided the best way to explain it is that “1867 1881 1981” is like a great book that promises a sequel, but whose author for one reason or another is unable to produce the latter, and leaves you wanting to know how it all turned out.

It’s timelines and lineage, distance and the ability to traverse short moments, identifying with a specific location, the apparent loss of spirit with a backbone that proves otherwise, trepidation, contemplation, and oh so much more. My boyfriend asked me to explain what I thought of this show to him.  I could only offer a five-minute diatribe that ranged from my Grandfather’s Greek Orthodox traditions made part of him by his immigrant parents, international trade and its implications, the ability of objects to transcend their physical boundaries in ways previously undiscovered, trial and error philosophy, as well as the importance of small moments.  BSaECW have created an environment that forces you to work towards an understanding.  I feel like if I had to come up with a mascot for the exhibition it would be a cheeky immigrant boy in the late 19th Century, peering off the bow of a ship while his family is sleeping are below deck, and being the first of his family to see Ellis Island in the wee morning hours.  I know this doesn’t make a lot of sense.  I could deconstruct the show object by object and interpret their juxtapositions and interrelated qualities.  However, this show BEGS to be seen.  I can’t stop thinking about it, and am so excited for such a wonderful experience to be only a subway-ride away, if only for another week or two. BSaECW’s “1867 1881 1981” runs through April 22nd at Bodega.  If you are reading this I want you to cancel your plans for next Saturday and go!  It’s not near anything in particular, but isn’t that part of the charm?