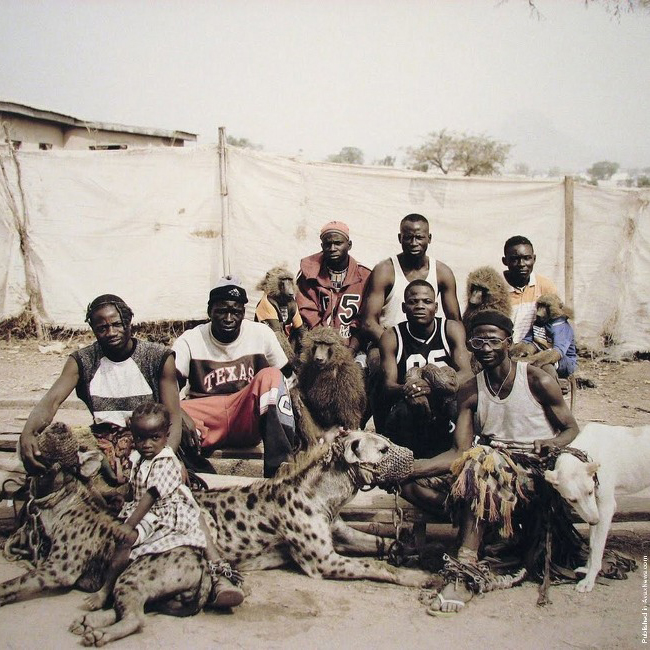 I originally stumbled across this via Visual Melt and was blown away by how striking and intriguing these images are. The blog had posted only the title and photos, leaving the story behind the photos unexplained.

One quick Google later and I’m on Pieter Hugo’s website reading the backstory. Inspired by a picture taken by friend on their phone of a group of men walking down a Nigerian street with a hyena in chains. This tiny picture led Hugo to embark on two trips to spend time with the ‘Gadawan Kura’ and observe their way of life.

“The spectacle caused by this group walking down busy market streets was overwhelming. I tried photographing this but failed, perhaps because I wasn’t interested in their performances. I realised that what I found fascinating was the hybridisation of the urban and the wild, and the paradoxical relationship that the handlers have with their animals – sometimes doting and affectionate, sometimes brutal and cruel. I started looking for situations where these contrasting elements became apparent. I decided to concentrate on portraits. I would go for a walk with one of the performers, often just in the city streets, and, if opportunity presented itself, take a photograph. We travelled around from city to city, often chartering public mini-buses.”

For me, these photographs inspire lots of conflicting emotions. As Hugo notes these photos have engendered “varying reactions from people – inquisitiveness, disbelief and repulsion”. I’d say that sums it up nicely for me personally.