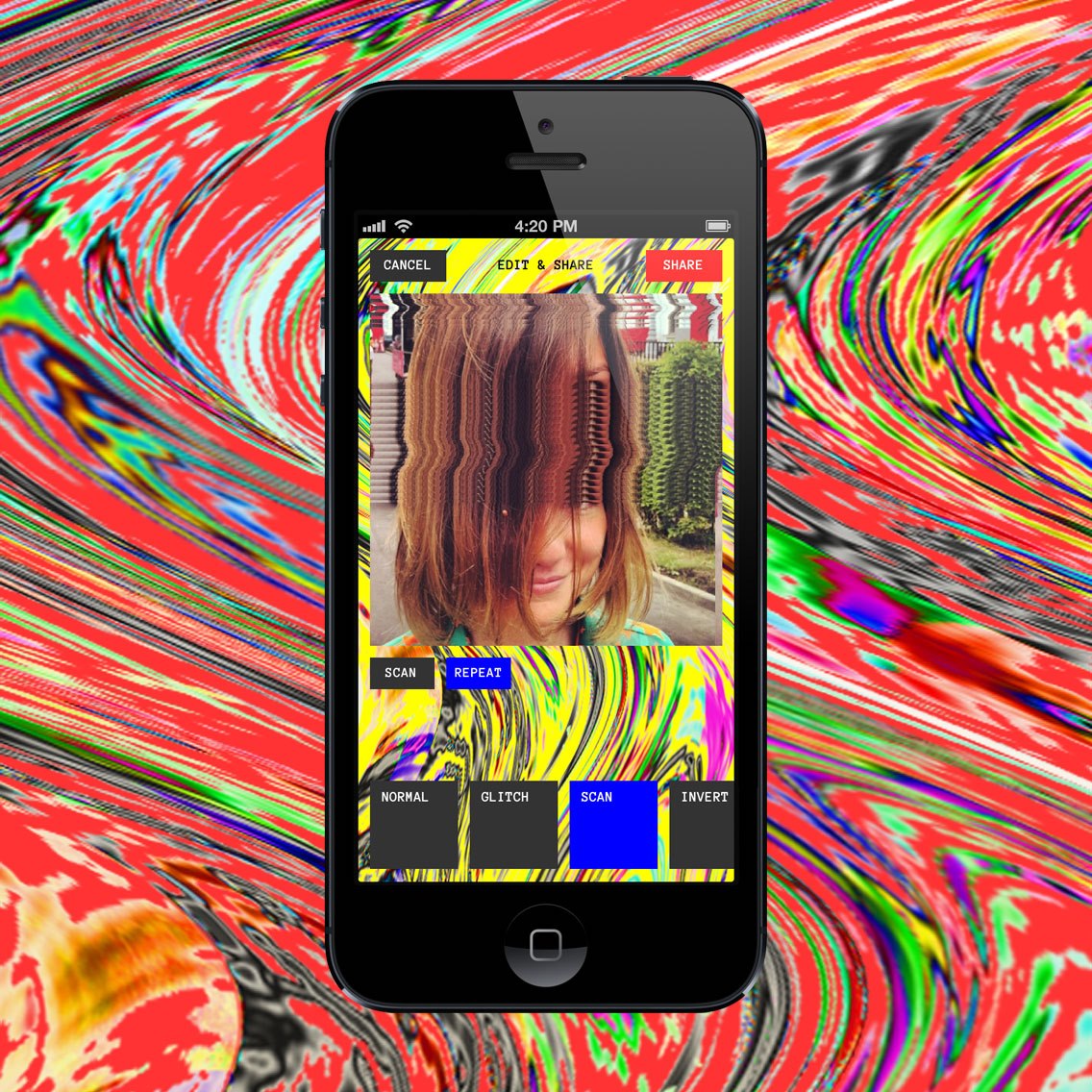 Damn, I’m addicted this Glitché app already and have just spent the last two hours changing all of my social profile pictures to abstract pieces of ‘art’.

Please keep your hands and feet inside the car until the ride has come to a complete stop because before I get to the app (I know I just said I would but I lied), I want us to take a trip waayyyyyy back to May 2011.

Are you with me? Good.

Two years ago an internet artist named Yung Jake released a cult video called Datamosh (below) that garnered a quiet but loyal following. His use of basic glitchy cuts and inversions, mixed with his play’d out attitude was a pretty big hit and got him a spot at Sundance this year where he played from behind a wall and no one actually… you know, got to physically see him.

Did you watch the video? Again, good.

Yung Jake is important because he is one of the best representations we have of the an artist adapting to the internet’s hyper consumption of memes and their subsequent abandonment of them. As individuals move on to cannibalise ever more content, we see a huge ‘junk trail’ festooning in the wake of our pop sensibilities, and hastened by the disposability of pixels on our screen.

This disposable culture on the net is prevalent more so with each passing year and is actually one of the reason Yung Jake started to make his art; he didn’t feel the pressure that has followed artists in earlier ages to produce unique content. And so playing on our fickle systems, Yung Jake snatches up images, vectors, gifs, whatever he can get his hands on and with colleague and friend Vince McKelvie carrys out his vision releasing some incredibly poignant pieces in the form of music, videos, visual online installations and more. Just take a look at his Tumblr, its pretty genius and you’ll see what I mean.

Of course we can’t talk about Yung Jake with giving a shoutout to David O’Rielly who I actually discovered through Datamosh. O’Rielly’s work dates back to 2008 (just slightly predating Yung Jake’s – I feel like an internet historian right now – damn you social science degree) and can be characterized by the use of intentionally stripped down 3d animation often times with sick intonations that go straight for your gag reflex. So, basically something I love (remember what he did to Octocat? Stick with it, seriously oh and watch the below).

When I was introduced to these artists, they just clicked with my sensibilities and I hope they do yours too. But I honestly thought I had missed the boat.

As it turns out, the party is just getting started for collaborative pixel pushers (these dudes are the exact same age as me… so, kind of old but also kind of yung so it works out).

Now, there’s a whole ‘nother dissertation I could go into at this point about the value of ‘likes’ and the dissociation our generation feels with one another, a gap broadened by the internet… but I won’t because you clicked this link to see a cool app and I’ll be damned if I’ll disappoint you.

Created by Russian designer Vladimir Schrader and developer Boris Golovnev. Glitché allows you to distort yours image through computer errors, glitches and crashes, turning them into works of digital art. The results can be shared with friends in the “Facebook”, “Twitter”, “Instagram” and Tumblr.

Visit www.glitche.com to DL the app and remember, in the immortal words of Yung Jake

It’s cool cause its nerdy.