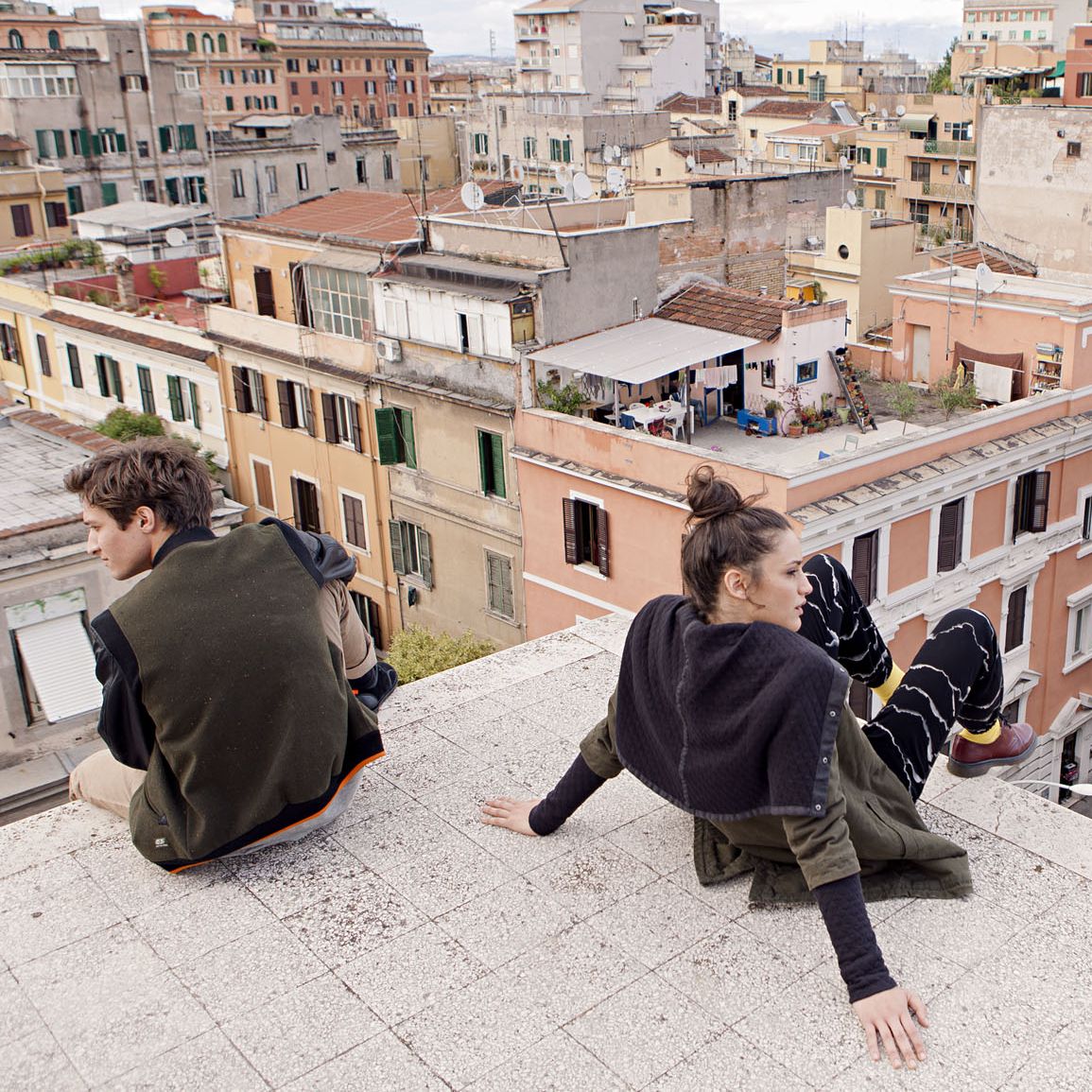 After three incredibly successful years, 55DSL’s flagship series Kids in Italia is drawing to a close with ‘Once Upon a Time in Italy.’ The spirit of the brand is Italian, original, creative, street-smart, fun and relaxed – these are also the guiding principles that drive this final film’s aesthetic and artistic sensibilities.

Concerned by the exodus of promising Italian creative talent caused by the global recession, 55DSL set out to make a short film that playfully explores the lives of a group of young people struggling to make sense of their future, the dilemmas they face and the options available to them in these uncertain times.

With ‘Once Upon a Time in Italy’, 55DSL offer a slice of magic realism cinema, as heartwarming and sincere as the most uplifting Italo-disco track! It’s a film that sends a message of hope and inspiration to creative young people everywhere.

Before uniting to become the fast-rising filmmaking duo Charlie & Joe, Charlie Robins and Joe Alexander cut their teeth working on projects for the likes of Rankin and on movies such as The Last King of Scotland and Green Zone. Together they’ve made music videos for SBTRKT, Toddla T, Prism, Topshop, Farrell, The Maccabees, A-Trak and many more.

Inspired by 55DSL’s brief to make a short film that posed questions about the political and economic climate in Italy, Charlie & Joe came up with a modern-day fairy tale that tells a story within a story and pays homage to the narrative fantasies of Michel Gondry and Wes Anderson.

In our hearts, Italy will always be the land of ice cream and wine, of passion, beauty and amore, a country blessed by nature whose rich heritage in the arts, science and humanities is the envy of the world. Look beyond the tourist brochure, however, and like many countries in Europe, a shadow of uncertainty hangs over Italy as it seeks to untangle itself from economic difficulties. There will always be problems to overcome, but in Italy inspiration is never far away.

In the film, our hero Carlo, an educated but unemployed young man tired of being turned down for jobs takes solace in science. Tinkering away on some mundane experiment, he experiences a “Eureka!” moment when he realizes he can turn olive oil into fuel, and is soon powering his moped and his mother’s flat. Sure enough, Carlo has accidentally invented a completely renewable, eco-friendly and above all Italian energy source.

But what happens next? Will his discovery inspire a generation of young Italians to return home and make Italy greater than it has ever been, or will his venture be corrupted by oily business tycoons intent on squeezing the goodness out of one man’s dream?

Charlie and Joe on working with 55DSL

“55DSL have been great throughout the entire process of bringing ‘Once Upon a Time in Italy’ to life. From the get go, it was a brave decision on their part to even commission this idea – as it is so different from the three films that came before it, in that it communicates a heartfelt story, rather than merely providing a beautiful backdrop for the clothes.

That is the wonderful thing about the ‘Kids in Italia’ project; each of the films that 55DSL have supported over the years have been genuine collaborations that bring young filmmakers’ visions to life.

55DSL were incredibly supportive of the idea throughout, and made our lives, and the decisions we had to make a great deal easier, especially bearing in mind that we’re two guys from London, who don’t really speak a word of Italian!

For both the shoot day in London and the day in Rome, we were so lucky to work with really amazing crews, and the 55DSL guys were just as much a part of that as anyone else. Making this film was a lot of fun and we’re honored to have contributed the final installment to this brilliant series.”

55DSL’s film series, ‘Kids In Italia’ has always been about giving brilliant, talented young creatives a global platform to share their vision. We’ve worked with individuals from all over the world and now, to round off the ‘Kids in Italia’ it was important to me to revisit what it means to be young & creative in 55DSL’s home country: Italia.

This topic is close to my heart because I made the decision to leave Italy when i was younger, around eighteen years old, to see what else was out there in the world. But, by the age of twenty-one, I returned home with the realisation that I am really lucky to live and to come from a county like Italy, even with all of the difficulties & problems this country has.

When I talk to young people who live in Italy, they are disillusioned about the lack of opportunities here, especially for creative types -and I felt the same way when I was their age. It is important to me to communicate that it is up to the next generation of creative talents to think outside the box and to establish their own opportunities here, instead of moving abroad.

So, with our final film in the ‘Kids in Italia’ series, we pledge to continue to support & stimulate the creativity of this community in the hopes that they will be the ones to make this change.