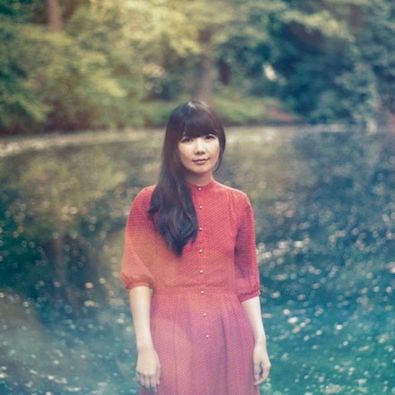 Butterfly Case is Cuushe’s breathtaking second full-length album, coming four years after her debut Album Red Rocket Telepathy and following her recent EP Girl You Know That I Am Here But The Dream.  While Cuushe’s debut focussed on field recordings and found sounds, Butterfly Case sees her transport her dreams into reality, expressing herself with beautiful analogue tape distorted synths, hushed meditated vocals, drum machines and looped guitars. flau label honcho aus, co-produced the album, while it was mastered by up and coming producer Geskia. These new songs let us see cuushe’s hazy visions realised, her imagination transcends anything we’ve ever seen before.
The Balearic guitar-house of lead track I Love You has already received praise from press both in her homeland of Japan and from the US and UK thanks to The Fader, Dazed and Confused, Yours Truly and many more. I Miss You tugs at your heart strings with its whispered mutterings of lost love, while the downtempo ambient R&B feel of Hanabi is reminiscent of Cocteau Twins & early 4AD meets soul music.

Born in Kyoto but based in Tokyo via Berlin, Cuushe blends piano, distorted synths and guitars with her dream like vocals to create a sound that engages with us all.  After the release of her first album, ‘Red Rocket Telepathy’ in 2009, she supported with Grouper on her tour of Japan before releasing the EP called ‘Girl you know that I am here but the dream’ in early 2012.  Featuring three new songs and remixes from the likes of Julia Holter, Teen Daze, Motion Sickness Of Time Travel, Blackbird Blackbird, Botany, it sold out almost instantly.  US producer Slow Magic’s newest remix of the track ‘Do You Know the Way To Sleep’ has been viewed almost 500,000 time on YouTube, the video for Airy Me (taken from Red Rocket Telepathy) has had over 180,000 views across her Youtube and Vimeo channels in under two weeks.  The EP was selected as one of the best albums of 2012 by TimeOut Tokyo.