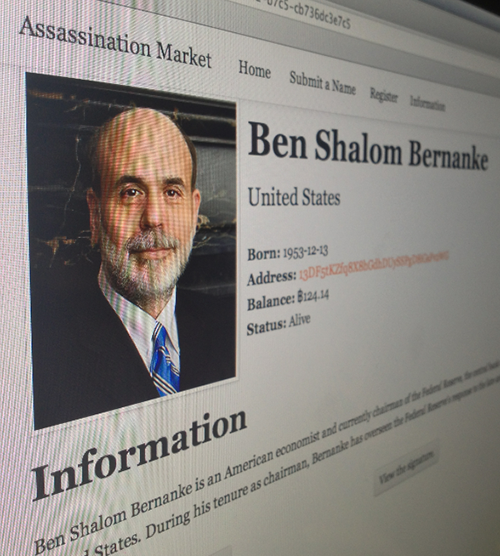 You can buy everything with BitCoins (and seeing as how the currency just hit an all time high early this morning of $700-800 a coin – which many are calling the ‘BitBubble’) it doesn’t strike one as odd that you’d be able to hire a hitman with the currency as well.

Forbes just released an article about a kind of kick-starter market for killers. Simply upload you intended target and anyone can contribute anonymously to up the price and encourage the hastening of their certain demise. From the article;

For now, the site’s rewards are small but not insignificant. In the four months that Assassination Market has been online, six targets have been submitted by users, and bounties have been collected ranging from ten bitcoins for the murder of NSA director Keith Alexander and 40 bitcoins for the assassination of President Barack Obam to 124.14 bitcoins – the largest current bounty on the site–targeting Ben Bernanke, chairman of the Federal Reserve and public enemy number one for many of Bitcoin’s anti-banking-system users. At Bitcoin’s current rapidly rising exchanges rate, that’s nearly $75,000 for Bernanke’s would-be killer.

About the site, it’s founder Kuwabatake Sanjuro (a pseudonym and name of famous Samurai from the film Yojimbo) says;

I believe it will change the world for the better… I am a crypto-anarchist… We have a bright future ahead of us.