Fight for your personal transit space 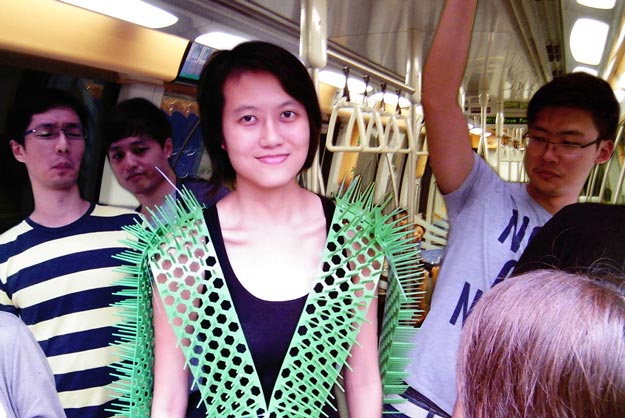 The amount of space available on public transportation is dismal at best in the United States, but for those who have been to Asia, you will know that the situation is much much worse. That’s why industrial designer Siew Ming Cheng has created Spike Away; a vest covered in spikes that are normally used to keep birds and cats away from plants.

Spike Away was created by Siew Ming for a workshop at the National University of Singapore, held by German furniture designer Werner Aisslinger when she was an undergraduate. The aim was to create a “Chindogu” solution, a Japanese term for a gadget that is meant to be more useless than useful, and (almost) solve an everyday problem.

Cheng considered the problem of public transport in Singapore as the perfect arena to create a Chindogu:

“In Singapore, usually during peak hours, the trains get pretty crowded,” Cheng says. “Everybody will push each other to try and get onto the train, hence the solution of: What if I wear a vest that is full of spikes?”

While the commuter accessory hasn’t been put to the test yet, which is kind of the point, it could quite easily be adapted for frustrated travelers across America. New York subways may even justify something slightly more rigid than a soft plastic spike as part of the outfit, but that’s for you to decide should you bring the creation to life.