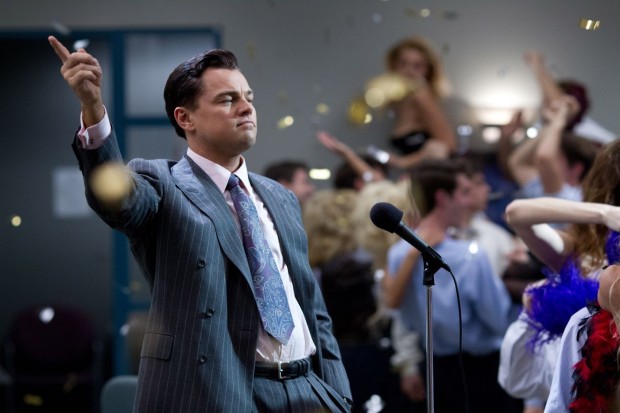 Not all horrors need jump scares or supernatural menace to be scary. They do, however, often require a monster, and The Wolf of Wall Street has one in Jordan Belfort. With near-psychotic ambition and a callous disregard for human life, Jordan Belfort is Patrick Bateman minus the last act bid for salvation. Unmerciful, and without pity, The Wolf of Wall Street is a horrifying film in which you choose to spend three hours with a sociopath.

And it’s all (mostly) true: adapted from the book of the same name by the real Jordan Belfort, the FBI man who investigated him has said that, “I tracked this guy for ten years, and everything he wrote is true.” Though it’s hard to believe: Played in the film with aggressive charm by Leonardo DiCaprio, the first time we meet Jordan he’s blowing cocaine up a hooker’s bumhole and attempting to fly a helicopter on Quaaludes.

Then, a flashback, to Belfort’s early days on Wall Street, as he meets with a crazed senior broker (Matthew McConaughey) to discuss the twin merits of coke and prostitution. The Guardian’s Alex von Tunzelmann writes that Belfort’s book “reads like American Psycho, only creepier”, and she’s right. American Psycho, both book and film, strongly expressed through satire how warped Wall Street life can be; director Mary Harron and novelist Bret Easton Ellis were guiding hands through the carnage. The Wolf of Wall Street, on the other hand, sees the villain as our guide.

The Wolf of Wall Street can be truly disturbing. In one scene, a naive sales assistant at Belfort’s ‘penny stocks’ firm Stratton Oakmont agrees to have her head shaved in exchange for $10,000, a room of pinstriped boors jeering as she devalues herself in the face of cold, hard cash. The Wolf of Wall Street portrays human life as cheap in a way that no other movie has really managed – women are for sex only, whether they be bought with cash or the influence powerful men have, while it’s OK to rob rich and poor alike, as ruthless suits high on confidence and ‘ludes laugh at their own cruelty.

This is a reflection of the Jordan Belfort character, not of the director, and Scorsese’s decision to let the character of Belfort inform the tone and attitude of the film is what acccounts for the picture’s chilling lack of morality and judgement. Jordan cheats on his two wives relentlessly and without remorse, and punches second wife Naomi to the floor as he attempts to kidnap their daughter as though she’s property. Because it’s of no consequence to Jordan, Scorsese doesn’t even flinch when Jordan speaks of his close childhood friend dying.

It’s the reason why so many people have had an adverse reaction to the film: Scorsese doesn’t overtly judge, and it’s always found criticism. Goodfellas was said to glamorise gangsterism, while Taxi Driver drew accusations of racism on Scorsese’s part. But really, Goodfellas was taken from the perspective of its crime-fetishising hero, as Taxi Driver was from the POV of a disturbed bigot – the director just happened to stay passive and tell the story as they’d tell it.

Left totally adrift in the fatally avaricious world of Wall Street, we’re left with a hangover and a deep sense of discomfort

It’s this kind of neutrality that makes The Wolf of Wall Street into true horror – filmmakers often feel the burden to make their morality clear in their work, whereas Scorsese never has. So we’re left totally adrift in the fatally avaricious world of Wall Street, without our director to guide us. It’s highly effective too: We laugh with the film – it’s pitched as a black comedy after all – and find ourselves enjoying the experience of Jordan’s exploits as he would. Then, after the credits roll, we’re left with the hangover and a deep sense of discomfort.

This is no depraved film, rather a film about a man of immense depravity that exposes us to the void at the core of high-octane business. It features what you might call a brave performance from DiCaprio (incidentally, it’s voguish to say how absurd it is that DiCaprio has never won, but he really should take home the Best Actor prize on March 2nd) – guaranteed, you never thought you’d see the guy from Titanic coked out of his mind with a candle rammed up his arse. It’s difficult to remember the last time a star so major played a character so odious.

At the end of The Wolf of Wall Street, the Wolf gets away with it. Jordan Belfort serves his time, but what’s a few months in jail when you get to spend the rest of your life stinking rich? There is no doubt that the man we see on-screen is a psychopath: narcissistic and self-serving, with a severe lack of empathy, the character fits the model. And though we’re used to seeing psychopaths on film, it’s rare that they don’t get any sort of comeuppance; more terrifying is the psychopath that remains in full, legitimised control.

Even more terrifying still is knowing that this man really does live among us – there’s the real Belfort at the end of the film, playing the host at a ‘Jordan Belfort’ seminar with a knowing smile – and that there are plenty of others just like him ready to flush your life down the toilet for the sake of their own personal gain. The film, then, is a timely reminder of how things are. The Wolf of Wall Street, for which ‘American Psycho’ would’ve been a more appropriate title had it not already been taken, is a true tale of corporate psychopathy and a horror film more frighteningly topical than anything of recent memory.