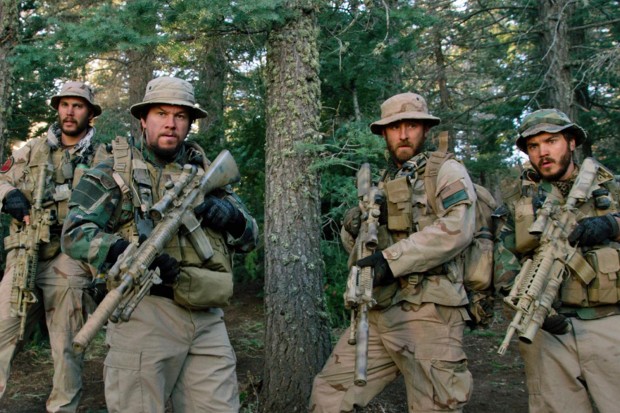 Peter Berg’s Lone Survivor is unashamedly jingoistic, but its immersive kinetic style still makes it one of the best portrayals of combat in years.

No one can deny it: Peter Berg’s Afghanistan-set true tale Lone Survivor is pro-military and proud. In the story of Marcus Luttrell (played here by Mark Wahlberg) and the disastrous Operation Red Wings, American soldiers are the good guys and the Taliban are boo-hiss bad. Afghan civilians, meanwhile, are untrustworthy, soundtracked with ominous musical cues. Documentary footage that opens the film, showing real feats of endurance by Navy SEALs, is both a recruitment video and a foreshadowing of pressures to come for Luttrell and co., but a final, pre-credits montage of photos and clips of the fallen servicemen depicted in the film, backed by Peter Gabriel’s horribly self-indulgent cover of Heroes, is manipulative in the extreme.

What Lone Survivor absolutely nails is detailing five days in the lives of four Navy SEALs and, in particular, an inglorious battle

What Lone Survivor does well, though, what it absolutely nails, is detailing five days in the lives of four Navy SEALs and, in particular, an inglorious battle which for three of the men will be their last. Hunted tirelessly by enemy forces, the survival of these young soldiers isn’t down to their patriotism, but in realising the potential lives they could have and trying desperately to still make them happen. This film isn’t meant for an insincere, “triumph of the human spirit over unspeakable odds” soundbite – Berg portrays combat as dutiful, but duty to survive here is both SEAL nature and human instinct. And oh boy is it graphic.

As SEAL Team 10 is shot and bombed to pieces, the dedication of Lone Survivor’s production team becomes invaluable. Sound and editing is used to recreate a crunching, ricocheting environment, but the make-up work of Greg Nicotero and Howard Berger must be singled out for praise. Twice do Luttrell and team hurl themselves down a rocky Afghan mountain to escape pursuing forces, smashing bones or colliding with trees so hard it blinds sniper ‘Axe’ Axelson (Ben Foster) in one eye, and Nicotero and Berger make the damage look absolutely real.

The performances from Wahlberg, Emile Hirsch, Taylor Kitsch and especially Foster (whose time is coming; next year, it’s a Best Actor nom for the Lance Armstrong biopic for sure), as the unfortunate four trapped behind enemy lines, are also mighty impressive in roles that emphasise practicality over character. The parts are minimally written, but the performers are raw, animalistic. As Berg reduces them to wounded beasts staggering through the wilderness, Lone Survivor realises its finest achievement: it makes movie war feel like real war.

There have been plenty of propaganda films throughout history, most of them much more dangerous or damaging than Lone Survivor, that regardless retain classic status today. Even Birth of a Nation and Triumph of the Will are now considered cinematic landmarks, despite their respective promotion of racism and Nazism. Critics now praise propaganda of the past, like Mikhail Kalatazov’s I Am Cuba for example, yet feel the need to make note of Lone Survivor’s jingoistic tendencies almost as a disclaimer. It’s as though the necessary amount of time required to embrace the film hasn’t safely passed.

It’s led to some middling, hesitant reviews. Every critic has seemed obliged to make reference to Lone Survivor’s politics, even if they liked the picture: Empire’s James Dyer concludes that the film is, “A severe portrait of fortitude under extreme pressure, somewhat marred by blinkered politics”. Andrew O’Hehir, who liked the film considerably less, focuses his entire review on its political viewpoint, dismissing its “disgusting symbolism,” while making hardly any reference to the film’s artistic credentials. Richard Corliss, meanwhile, began his review with the headline, “Why Are We In Afghanistan?” The reaction suggests that critics think Lone Survivor’s attitude toward issues that are current is what makes it more dangerous than a film like I Am Cuba. For that, they seem to be saying, it must be approached cautiously.

Separating the artistic merit from the message, I Am Cuba is mesmerising, a four-story collection of impossible tracking shots (the film was made in 1964, pre-Steadicam) and helicopter scans over lush landscapes. Contemporary critics reject the film’s portrayal of westerners as affluent chauvinists and boors because they know enough to know it isn’t straight, total fact, but have rather praised I Am Cuba for its technical prowess and crackling, tropical energy. Movie critics, you see, are intelligent enough to admire the artistic product without succumbing to its political influence. On the contrary, it’s hard to take seriously the wilful message of any obvious propaganda film.

And so it should go with criticism of Lone Survivor. Peter Berg’s film has an opinion, and it’s admittedly not one everyone shares. I don’t believe the reality is as black and white as ‘Taliban bad, US forces good.’ I also don’t consider warfare to be a glorious thing, whereas Berg – through his particular way of celebrating battlefield heroics – seems to. But I’m comfortable knowing Berg and I probably wouldn’t completely agree on politics were we to ever meet (I’m not planning a move to LA, but he’s welcome to come to Huddersfield), because I can also appreciate he’s a quite brilliant filmmaker. His film is brutal, relentless, kinetic, visceral – to hell with his politics.

You have never, ever seen a skirmish like this in the movies, and that unparalleled experience is why you should see Lone Survivor. By all means have an opinion on the War on Terror, American intervention in Afghanistan, the futility of the real Operation Red Wings or how Berg appears to feel about any of the aforementioned. But those feelings should remain separate to your verdict on the film’s quality. In Lone Survivor, the technical achievements across the board will put you in the combat space like never before – in that respect, Peter Berg’s film is masterful, and should find outright praise for it.