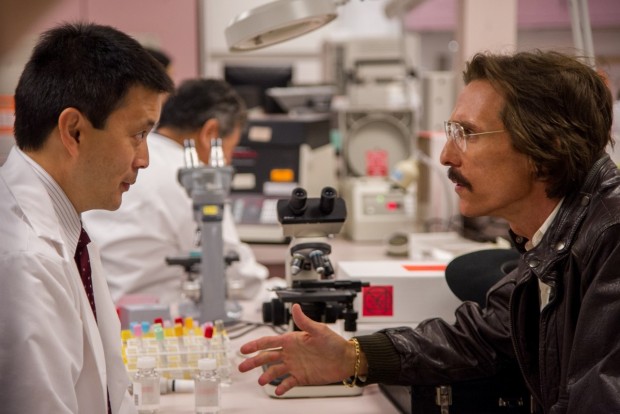 A multiple Oscar nominee and official product of the McConaissance movement, Dallas Buyers Club is a fine example of a good film made great by its performances.

Everyone is talking about the transformation of Matthew McConaughey (including us). Who’d have thought that the star of Failure to Launch and Fool’s Gold would be the name on everybody’s lips in Hollywood, and not just the ‘who looks the best without a shirt on’ poll. In the last few years, Matthew McConaughey’s turned from the punch-line to the main event and Dallas Buyers Club is the direct result of him being at the top of his game.

McConaughey’s physical transformation in Dallas Buyers Club is extraordinary, but it’s not the main focus

Dallas Buyers Club is the true story of Ron Woodroof (McConaughey), a straight man who contracts HIV after a string of unprotected encounters with strangers. He, like many others in Texas in 1985, believes that AIDS is synonymous with homosexuality and takes great offence when the news is broken to him. After he’s given a month to live, and refusing to accept his sentence, he turns to black market medicine to prolong his life and the lives of many other sufferers of the disease.

McConaughey’s physical transformation in Dallas Buyers Club is extraordinary, reminiscent of Tom Hanks in Philadelphia, a film also about a man struggling with AIDS. His skinny waste, sunken face and dark circles around his eyes mean he resembles a novelty skeleton in a Tim Burton animation. It’s a man literally close to death, and a long way away from McConaughey’s Magic Mike physique. But although it’s striking initially, it’s not the main focus of his performance.

McConaughey embodies Woodroof, to the point where you’d think it’s the real Ron Woodroof walking around in front of a camera crew. Woodroof likes to put a brave face on; he’s fearless and defiant – “There ain’t anything out there that can kill Ron Woodroof in 30 days,” he spouts when given his death sentence. His eyes, though, tell a completely different story. He’s full of fear, fear of death, fear of the unknown, which the disease was in those days. When you see past his foolishness and his blatant homophobia, you see a man inside, facing his own mortality and being absolutely terrified.

Dallas Buyers Club ticks the Academy’s boxes, but the performances really made Oscar sit up and notice this film

It’s this that McConaughey’s performance should be remembered for, not the physical transformation. Jared Leto, who plays the transsexual Rayon, also provides a stellar performance, yet as with McConaughey it’s a physically demanding one. It’s a very unlikely pairing – as people, Rayon and Ron are absolute polar opposites, but they share the same diagnosis and both refuse to succumb to it. That is their common ground. Rayon proves a catalyst in the story and contributes greatly to Ron’s change in character.