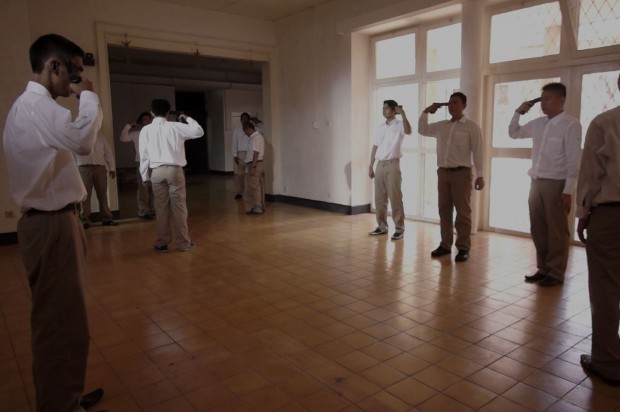 Is it time Hollywood started drawing up plans for the Nolan, Spielberg, Abrams and Bay-directed anthology disaster movie?

V/H/S/2: The Anthology Done Right. Catchy, no? OK, so that wasn’t exactly the title producers chose, but that doesn’t stop it fitting. This horror anthology, an infinite improvement on the first sloppy outing, is an example of top notch directors – promising up-and-comers (Gareth Evans) and proven genre veterans (Eduardo Sánchez) alike – duking it out with their own unique takes on the growing found footage trend.

The anthology concept provides a battleground, a chance for each director to show the others just how talented they can be

What the anthology concept in V/H/S/2 does for these passionate filmmakers is provide a battleground, a chance for each director to show the others just how talented they can be. Basically, it brings out the best in people. Nobody wants to put out the worst product, which means that each project is laden with interesting twists, that each stand out on their own and in the end the audience is treated to four completely different tales. Albeit some are better handled than others, but that’s the joy of competition, and if all the filmmakers are competent in one way or another the audience will (should) appreciate what they’re trying to do.

V/H/S/2 has a POV eye-transplant ghost film, a unique take on the zombie genre taken from the zombie’s perspective, an immersive cinema vérité style documentary piece on a sadistic cult (easily the standout piece – it’s insanely unnerving) and an alien abduction film that was everything Dark Skies and The Fourth Kind should have been. All this held together nicely with another, thriller-cum-possession investigation film. If you’re not enjoying one short, another is right around the corner to grab your interest.

Obviously V/H/S/2 isn’t perfect. The camera work is fairly vertiginous and hard to get used to – if you’re prone to travel sickness, this may not be the best thing to sit down to. The budgets for the anthology are also fairly low and although each filmmaker makes the most out of it (they really do throw their balls to wall – Gareth Evans: “Eight days, no breaks, 18 to 20 hours a day, one day just under 24 hours. It was crazy”), you can’t help but think, once throwing the hand-held style aside, what if these anthology movies were given blockbuster budgets to play with?

Casting the hand-held style aside, what if these anthology movies were given blockbuster budgets to play with?

Often bigger budgets can mean less care is taken in regards to creativity, the film relying on its visuals and marketing to carry it through to profit. However, if these directors were forced to ‘compete’ against each other, then their pride and creative reputation would be on display; they would have to put out the best product possible. Can you imagine a disaster film, taken from four points of view across the world, with Nolan, Spielberg, Abrams and Bay the driving forces behind each half-hour episode of furious spectacle?

I’m just pulling names out of the Big League Director’s Hat here, but you can see where I’m going with this. They’re all roughly in the same weight class, each person has made a name for themselves in their own right and each has dropped a dud in recent times too. With that said, each director is very capable – an anthology movie would be a chance for them to show off their creative muscles, instead of just their wallets.

With a growing trend of identical concepts in movies (White House Down/Olympus Has Fallen, Mirror Mirror/Snow White and the Huntsman, etc), why not cut all that out and just play them off against each other in an anthology? The anthology could also help in regards to large franchises trying to cover ground before releasing their big pay-off feature (see: The Avengers), with a chance to introduce fans to multiple characters. With Marvel’s potential Sinister Six and Venom movies, plus anything else they feel like milking along the way, the anthology movie may be a way to do that as well as introducing audiences to new directors. A villain anthology may be the only way to keep audiences invested in characters which are by default unsympathetic, by simply creating interesting tales for each character.

Now, before this starts to sound like John Lennon’s Imagine, it’s probably widely understood that nothing is this black and white. You’re probably not going to get Tarantino, the Coen brothers and Martin Scorsese together on one project, but what the anthology movie does is create a breeding ground for a director’s hidden talents and could easily become a great source of mainstream revenue if handled as such. Movie-making isn’t child’s play; there will not be prizes for everyone. But man up and take a chance Hollywood, if you will.