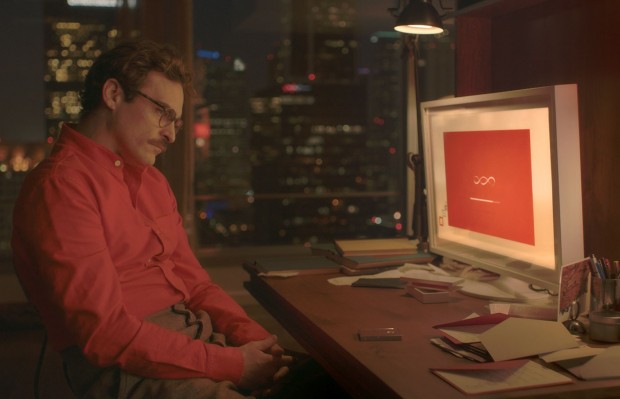 The future is slight and well textured, but colourless. What is apparently L.A. (also filmed in the Pudong district of Shanghai, to give it that anonymity) is clean and seemingly fragrant; people live more on top of it than in it. It’s a world with no odour and no signs of passing. But people don’t live there. Not really.

In Her, nothing is palpably real and yet the entire world looks for some facsimile of it

Theodore Twombly (played by Joaquin Phoenix), lonely and recently divorced from Catherine (Rooney Mara), lives in an anonymous high rise, and dictates hand-written love letters for other people to a computer. Nothing is palpably real and yet the entire world looks for some facsimile of it. Theodore’s friend, Amy (Amy Adams), makes video games about mothers driving their children to school while pursuing her real passion of making a documentary with apparently scintillating footage of her sleeping mother.

But Theodore doesn’t want to live in the real world. All his adventures there have resulted in half-hearted failure, of his marriage, and of his literary aspirations. This is where Samantha (Scarlett Johansson) comes in, a body-less artificial intelligence with the capacity for emotions, feelings, growth and opinions all her own.

As Samantha and Theodore grow closer, they tell bad jokes, go to the beach and double date with Chris Pratt. Even their ‘sex’ scene, although imaginary, fades to black while they do something that appears to be entirely satisfactory for all involved. Samantha and Theodore’s relationship is almost entirely real.

It is, however, hermetically sealed. Like the beginning of any romance, they live in their own private universe. In the beginning, Samantha is the misogynist’s idea of the perfect woman. She laughs at your jokes, submits to your apparent wisdom and wit and doesn’t talk back. She remains passive (she’s the only person more passive than Theodore). For a time, Samantha doesn’t belong to the real world – she belongs to Theodore. When she does start a real life, gaining self-knowledge and developing relationships with other AIs and people, the cracks start to show.

Her is told from inside the fish tank of Samantha and Theodore’s relationship, asserting a diegetic reality in the caverns of the brain. Arcade Fire and Karen O’s lush soundtrack privately punctuate the interior journey like headphones. The flashbacks to Theodore’s marriage to Catherine act as scenes in themselves, edited as rhythmic flickering memories.

While Johansson’s performance is heartbreaking and elicits as much empathy as any disembodied voice could, there is no great stretch in acting here. Joaquin Phoenix plays a creepy, alienated loner very well, as always. Amy Adams is charming and sensitive, as always. Rooney Mara is intermittently brooding and delightful, as always.

Her is not a film about the world; this is a film about looking out onto it. And deciding whether to even engage in it at all

One of the really great performances in Her arrives with the five minutes that Olivia Wilde is in the film, playing Theodore’s first date after his marriage. Through the laughing and flirting and suggestion of sex-to-be-had, there is a just-conspicuous sadness. A sadness which rears its head when she asks him, “you’re not just going to fuck me and never call me back, are you?” Theodore relents, unwilling to engage with a real person, and all the baggage that comes with one.

It’s a crime that Wilde’s performance should be reduced to a simple object lesson, but this is Her’s real strength. It’s a frank discussion of love, loneliness and even the nature of reality in a world where technology is increasingly replacing traditional human relations. In terms of a science fiction film, Her feels small. But then again, this is a not a film about the world; this is a film about looking out onto it. And deciding whether to even engage in it at all.