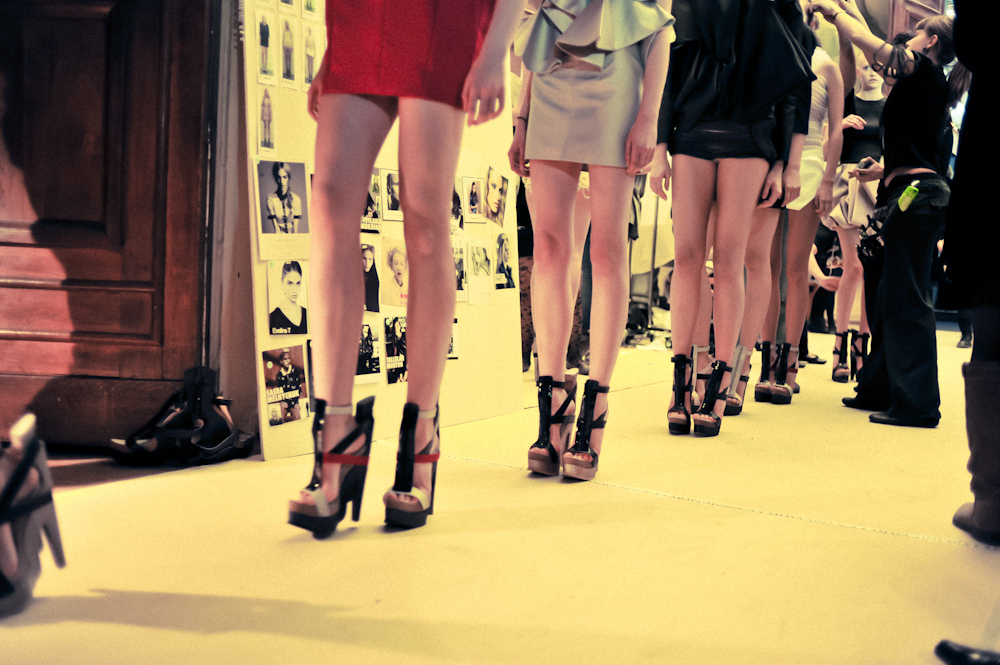 No ticket to the shows? Don’t panic – where there’s a will, there’s a way

Bitchy looks, inappropriate footwear and some ugly ass models – yes, London fashion week has flown by again, but not without the obligatory gaggle of tweens trailing after Harry Styles.

For most regular people, fashion week seems to be a whole world away – a place that is frequented by fashion big dogs like Anna Wintour and Kate Moss, posing nonchalantly in the shit London weather. Fashion week is also packed to the brim with celebrities, many of whom don’t know diddly-squat about fashion, but go because they had a front row seat invitation dropped into their lap (who can blame them). Then you have all the fashion bloggers, competing to see who can wear the most ludicrous outfit and thus procure the most attention as they drift around in the courtyard of Somerset House.

And then, of course, there are the rest of us. Not the cool industry lot who have tickets, but us mere mortals – the sad losers who must idle on the cusp of the red carpet, grasping at the frayed ends of Alexandra Shulman’s skirt in the vague hope that we can sneak into a show. Now it is a bit of an urban myth that you can blag your way into any fashion show – everyone seems to  know someone, who knows someone who did it successfully for the whole week, but it’s definitely not as easy as you might have been told. I’m here to tell you it can be done, but as I have found out, it is somewhat more complicated than saying you’re Cara Delevigne’s cousin’s girlfriend’s flatmate.

It’s important to mention that there are numerous locations for fashion week, and unfortunately some are, quite frankly, impossible to penetrate without an invitation. Somerset House is the main hub, with other venues like the Topshop Show Space hosting a selection of shows. Vauxhall Fashion Scout is the place to go for international and up-and-coming designers, and from my experience, this is the best place to shark about. However, finding the venue it the easy bit – it’s getting through the golden gates which will prove the hard part.

First of all, as fashion week progresses, security tightens up considerably so if you are able to, get down there on the first or second day and give it hell. The general set up is that you line up outside the Freemason’s Hall, until you are let in through the main entrance, then after the show you leave the building and line up again. This means that not only is it obvious when there is a show about to begin (although there is normally one every half an hour or so), it’s also the perfect place to people watch.

You can queue up, get to the front, and try to reason with the girl on the door – ask sweetly if she wouldn’t mind, erm, if you can perhaps, erm, just slip in at the back after everyone’s gone through, perhaps, please? These girls don’t like attitude, so although you want to scream, “Look love, you’re working here. How does that feel?”, you can’t. They have probably had to endure a bevy of bitches trying to get in already that morning, so be humble and smile. Unfortunately, you will have to step to the side and ignore all the assholes who flick their hair in your face as they walk past fanning their invitations, but you’ll feel suitably smug at the end when you’re escorted through and given a guest pass.

After the show, hang around inside the venue as much as you can. I’ve hid in the toilets and behind pillars before – yes, you look sketchy, but it’s effective. If you are inside whilst people are coming in again for another show, go straight to the girls on the door to the catwalk, who are often nicer than their counterparts outside. They will let you in at the end after you’ve told them (convincingly) that the girls outside said it was fine.

You can also put two fingers up at feminism and flirt with the security guys – preferably the ones inside, not out, as they are the boundary between the girl outside and the girl on the door to the catwalk. When I was interning at a well known women’s monthly magazine I had to do exactly that after the teenage work experience girl buggered off back up North with the with communal industry pass that we were all meant to be using. She had previously confessed that she wanted to keep the pass “as a souvenir” – which she clearly did, despite the fact there were a number of us who had to share it for the rest of the week. Luckily the bloke took pity on me and let me carry on hopelessly searching inside the building for her, like a tramp looking for a discarded sausage and egg McMuffin. Although, that in turn gave me the opportunity to sneak into another show.

Invitation or not, visiting LFW is an experience that everyone should have at one point. Some will enjoy it, thriving on air that’s stuffy with desperation, and the crowd of supposedly nonchalant faces all secretly weighing each other up – there’s nothing like it.

Of course, if you manage to wangle yourself an actual invite, you’ll be justified in basking in your smugness, but if you don’t, a certain amount of dignity has to be left at the door. You’re now at the mercy of other, better connected people. So dress classy, suck up to the clipboard wenches and for God’s sake, once you’re in the building use every jammy trick you can to stay in there.