Odd Future: The good, the bad and the ugly 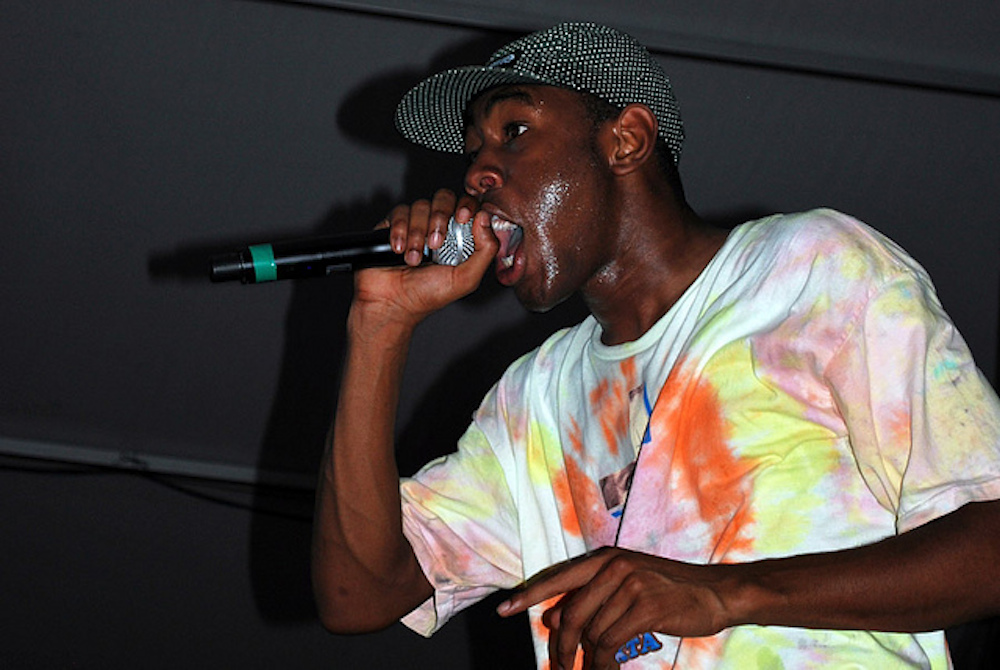 The hip hop collective are no strangers to controversy, but are they really as bad as everyone makes out?

Tyler, the Creator is facing a year in prison and a $4,000 fine for allegedly inciting violence at SXSW festival. The 23-year-old rapper is accused of this class A misdemeanour, because he shouted “Push!” to a crowd. And hundreds of people pushed. There are no reports that any violence occurred in the crowd.

Now, I like Odd Future, but I normally take my music played by big, burly blokes with beards who shout a bit. It’s the kind of music your Nan tells you “is just noise”. I’ve been to many noisy gigs in my time, where I’ve been pushed and trampled on, which has been actively encouraged by the band playing. I’ve never known any of them be arrested for it. But then again, I’ve never experienced a gig in Texas.

It seems like OF are constantly in trouble. Like a Daily Mail wet dream come reality, they have been accused of homophobia and misogyny, been banned from countries and been sued by American chain restaurants. Some of this is inexcusable, I admit, but some of the ‘controversies’ seem a little dubious.

Sometimes, Odd Future members do act like dicks. In 2011, Left Brain was charged with assault after he slapped a female photographer. A few years back, Tyler told openly gay artists Tegan & Sara that they needed “some hard dick”. And Frank Ocean was just being bloody stupid when he got pissed off that a Chipotle advert he was meant to sing on featured a Chipotle logo. And then, of course, there are the Mountain Dew adverts, which Tyler masterminded, and were accused of being “arguably the most racist adverts in history”. I don’t even think I need to detail what’s wrong with these.

But there’s also the stuff that doesn’t make sense. In February, New Zealand decided to ban OF from entering the country, because the authorities heard of an incident in Boston three years ago where the band apparently told fans to attack the police. The country also banned the group from performing in 2011, citing their lyrics as offensive. It’s worth pointing out that the most recent ban prevented OF from playing a gig with Eminem. I highly doubt the argument that any of OF’s lyrics are any worse than what Eminem was espousing in the 90s.

Tyler is definitely the most nefarious of the bunch and, as Syd tha Kid once pointed out: “People forget that half of Odd Future isn’t like Tyler. It isn’t all shock rap.” Tyler may be the ‘ring leader’ of the group, but he and his music aren’t their sole drive. Their musical output is vast – including solo projects and smaller groups, which focuses on a wide range of topics. OF have their own TV show, Loiter Squad, and have produced a short film, Ghost Hotel. They have a constant stream of pop-up shops, selling merchandise which they design. This isn’t simply a list of their achievements to deflect from their idiocies and controversies, though. OF may be accused of homophobia, but they include two artists who have openly admitted having same sex relationships, and have been just as openly supported by the rest of Odd Future. And there’s no denying how rare this acceptance is in rap culture. Syd has said of the group’s apparent misogyny in their lyrics: “Actions speak louder than words, and they treat me as an equal”.

The collective is also very young – the eldest member, Matt Martians, is only 26. Tyler once said, in a Newsnight interview with Stephen Smith, that his lyrics were simply “shit to piss old white people off”, and there’s something to be said for that attitude. The shameless provocation that comes from teenagers – the juvenile mission to be more outrageous and prove more points than those before you – pervades their music. Perhaps OF’s music is a darkly comic reflection on this.

Odd Future seem to want to change the world, only they’re going about it the wrong way. To return to Syd, she says: “We know we cross the line, but we think the world would be a much better and funnier place if people weren’t so offended by it.” And she’s right, it would be a better place. It just seems, however, that OF refuse to acknowledge that offence and hurt tend to come from years of abuse because of your gender, sexual orientation, ability or race. I don’t think that this makes them bad people, I think that they just need to grow up a bit.

I’ll leave the last word to Christian Clancy, the band’s manager, who released a statement on Tumblr, in defence of Tyler after his arrest: “I understand how easy it is to paint Tyler as a bad guy, but this is a guy who is building his own business and challenging the old ones. Offensive? Maybe, depending on where you’re standing. But only on the surface.”