The Kardashian kult: Wintour’s happy, why aren’t you? 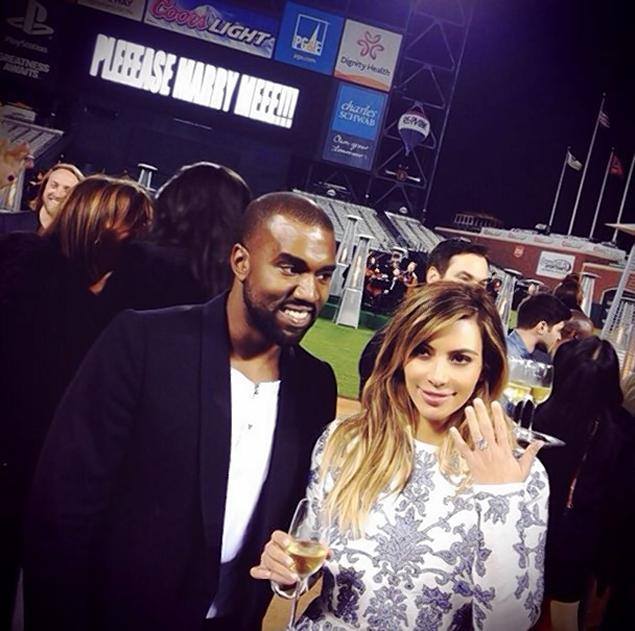 Kim Kardashian and force-to-be-reckoned with fiancé Kanye West have finally graced the April cover of US Vogue. And, because no one can resist taking a swipe at the multi-hyphenate power couple, the web was flooded with insults and parodies and Twitter, as it is wont to do, had a breakdown.

Now, this argument might be more controversial than the cover itself, but I think everyone needs to chill out. It seems that this overwhelmingly negative reaction to Anna Wintour’s choice is bred more from force of habit, than being a genuine reaction to the striking photo (or photos if you bother to open the annual shape issue) of two of pop-culture’s most influential personalities.

Be honest, can you argue with how incredible she looks? And I say ‘she’ because most of the negative attention isn’t focused on West who is a long-time friend of the magazine. Love him or loathe him,  he is widely considered to be a big influence in both music and increasingly fashion too. The cover, shot by veteran Vogue photographer and household name, Annie Leibovitz, sees the newly-engaged duo in a most romantic pose and bathed in a very flattering light. Quite honestly, Kardashian looks just as comfortable in that Lanvin wedding gown as she did in skin tight leopard print circa 2012.

So why all the hate? Sarah Michelle Gellar (remember her? anyone?) led the celebritweets, declaring to her 200,000-strong Twitter following that she was unsubscribing from the magazine and asked who was joining her. Uh, so? We’ve barely heard a peep from her since The Grudge and I’m not sure that even Buffy fanatics would consider her the Pied Piper of the sartorial world.

The ratio of love vs. hate tweets is split roughly down the middle but the majority of negative tweets are indicative of people blindly jumping on the bandwagon – loosely ridiculing with no real insight as to why. A photoshopped cover parody from James Franco and Seth Rogan was widely re-tweeted and published in mainstream news but that speaks more to the actors’ comedic timing and a running joke than it does to the legitimacy of the choice of cover stars themselves . The positive commentators take the time to go into much more detail,  praising Wintour for putting a man of colour and a woman who isn’t a size zero on a Vogue cover.

The venom spewing forth from the keyboards of everyone from arguably-irrelevant Gellar to blogger and fashion glitteratus Bryan Boy, all sounds a little outdated. We seem to be forgetting that Kardashian has come a long way since her home movie and QuickTrim-wielding days and has, of late, been rubbing shoulders and holding her own with fashion figureheads, music industry big-dogs and the Hollywood elite. Let’s not forget she was handpicked by CR Fashion Book’s Carine Rotfield to be photographed by Karl Lagerfeld in a shoot styled by Riccardo Tisci. Not too shabby.

Outspoken West has not-so-quietly campaigned for his baby mama to feature on the Vogue’s cover for a while now and clearly knows who to talk to, having himself featured in March 2012. Sitting alongside Tisci and the Givenchy designer’s muses, West was long ago welcomed into the fold and, since hooking up with Kim, has paved the way for her to join him. He single-handedly changed her entire look, swapping body-con dresses for flattering Calvin Klein crop tops and pencil skirts. She features less and less in the family reality series and has kept baby North out of the limelight almost more than the beloved Carters have with Blue Ivy. The evolution of a star (reality or otherwise) is no new phenomenon – Matthew McConaughey is living proof of that possibility – and granted, the obscene wedding and subsequent doomed-marriage to Kris Humphries didn’t do wonders for her fame-hungry reputation, but Kim and her famous extended family are making waves, selling tabloids and have been for the better half of a decade without a lull. You can’t be completely talentless and achieve that sort of sustained success. Not a day goes by that at least one of the Kardashian clan aren’t sitting pride of place on the homepage of the Daily Mail. The world is always watching.

While reality TV isn’t the most glamorous of stardom pursuits, she keeps good company, and does it with a lot of dignity (except, ya know, that one time). Posh and Becks have dabbled in the reality TV industry with nowhere near as much success and midas-touch Oprah Winfrey recently  produced a reality series that follows hot mess Lindsay Lohan through life post her most recent rehab stint. Slowly, the Kardashian family have blazed a trail of legitimate entertainment – reality TV that doesn’t involve eight strangers in a house throwing up on each other or wetting their beds, à la Geordie Shore.

Vogue has always been a medium to feature the world’s most interesting, relevant and beautiful people. Wintour herself agrees that Kardashian has done a stellar job of carving a place for herself in the entertainment landscape alongside her superstar husband-to-be. Her recent fashion prowess, her cultural impact and her connection to one of the most famous names in music cements her position and makes her as good a candidate as any. If anyone disagrees with that, maybe they should ask themselves why they’re so furiously fighting it.