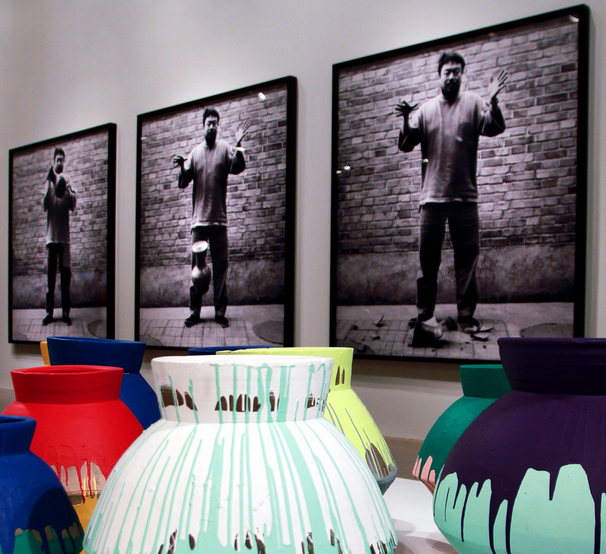 It may be fun to go around smashing, scribbling and defacing. But it’s a poor way to make your point.

“Protest – a statement or action expressing disapproval of, or objection to, something.” So says Google search. Thus when Floridian artist Maximo Caminero smashed a $1m vase, made by the Chinese dissident artist Ai Weiwei, he must have been expressing a pretty vexing objection to something. I mean, you would have to be pretty fucking wound up about something to go round smashing someone else’s art to make a point when you, yourself are an artist.

After his temper tantrum, Caminero told the press that: “I did it for all the local artists in Miami that have never been shown in museums here.” He went on to explain: “I wanted to draw attention to the fact that there are many foreign artists like myself and others who have been here 30 years and have never received attention or support from MAM or now PAMM and other local museums.” Caminero may well have a good point but, as Weiwei very calmly pointed out: “The protest itself may be valid but to damage somebody’s work to do that is questionable.”

Indeed, I can think of several other ways Caminero could have tried to make his point before turning to smashing pottery like an overzealous guest at a Greek wedding. How about contacting some museums to make a formal complaint about their lack of support? Or petitioning the council for more recognition of local artists? Or, if you really want to destroy something, why not throw a brick through the window of an offending art gallery. Of course this is not the first time that artwork has been attacked as a means of protest, but that doesn’t mean it’s justified.

In 2012 Wlodzimierz Umaniec, a 26-year-old Pole was jailed for two years after causing £200,000 worth of damage to a Mark Rothko painting, housed at the Tate Modern. Having painted his own name and the message ‘A Potential Piece of Yellowism’ in the corner of the work, he later claimed that: “Art allows us to take what someone’s done and put a new message on it.” He went as far as to compare himself to Marcel Duchamp, the conceptual artist who is perhaps most famous for his urinal piece, Fountain. Um, no, sorry. Defacing a cherished piece of work worth over £5 million does not qualify art and you, Umaniec, are not an artist. Strangely enough Duchamp’s urinal was also a victim of an attack, when Frenchman Pierre Pinoncelli attacked the piece with a hammer in 2006. He argued in court that his action was: “A work of performance art and he had made Fountain, one of eight versions of the piece, an original.” The judge thought otherwise and Pinoncelli was ordered to pay a hefty £147,000 fine.

Vandalising artwork may guarantee shock value and attention to a cause, but it’s also destructive and selfish. I will avoid dipping my toes too far into the debate of ‘what is art?’ but the Chapman brothers certainly stirred up this idea when they painted over 80 of Goya’s Disasters of War paintings, changing victims heads to those of clowns and puppies. The Chapmans are no strangers to controversy, but as one incensed critic put it: “Defacing a work of art is, perhaps, the last taboo of the liberal, Britart-loving, Tate Modern-going public… To destroy a work of art is a genuinely nasty, insane, deviant thing to do.” The altered pieces were called Insult to Injury and were included in the show, The Rape of Creativity. You can say many things about the Chapmans, but at least they are self-aware.

Ai Weiwei’s condemnation of Caminero’s actions is not hypercritical because Caminero’s purpose was not to create art, it was to complain

Some pointed out that because the dropped vase was actually a Hans dynasty urn that Weiei had ‘appropriated’ himself by painting over the original ceramic, then perhaps the Chinese artist is a ‘vandal’ himself. Weiwei has even created an artwork called Dropping a Han Dynasty Urn – three photographs depicting him doing just that. But his condemnation of Caminero’s actions is not hypercritical because Caminero’s purpose was not to create art, it was to complain.

It might also be safe to assume that Ai Weiwei, who has been imprisoned, fined millions of Yen following a fake tax case and banned by his own government from travelling without official permission, might not sympathise with Caminero’s ‘grievances’. The art world has never been advertised as an easy place to make your mark, and this protest feels a little like an attention-seeking toddler throwing a tantrum. Caminero did eventually apologise for breaking the vase and was charged with criminal mischief and could face up to five years in prison if convicted. Although it is unlikely he’ll go to jail, it’s also unlikely that the event will have any effect on PAMM’s treatment of local artists.

Indeed, when asked what PAMM thought about the whole thing, their deputy director for external affairs came out with this: “We’re hurt, we’re upset, but we’re so thrilled that the museum has carried on and is up and running in a fabulous way today.” Sounds like Caminero’s protest has fallen on deaf ears.