Step away from that beanie: Grunge has had its day 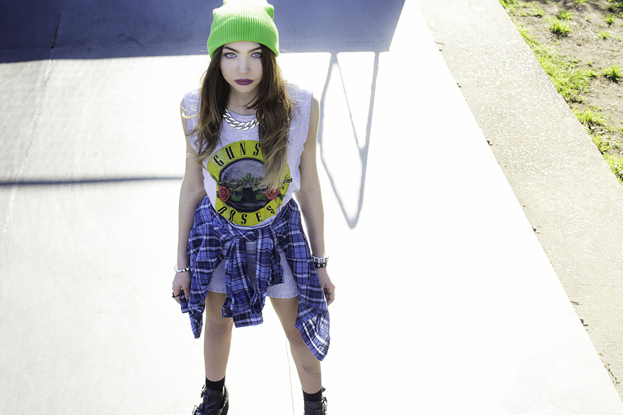 According to the current issue of Grazia, wearing skirts over trousers is back in fashion. Dear God. They were one of the more pointless fashion trends of the 90s – and that is no mean feat in the era of tattoo chokers. If we had half a brain, we’d laugh in Simone Rocha’s face and say “Go home. You’re drunk.” Frankly, I’m sick of the fashion world trying to make me dress like a 15-year-old boy. To me, grunge is dead.

Unfortunately and unsurprisingly, many fashion labels don’t seem to have much interest in my thoughts on their A/W 2014 collections and it probably won’t be long until Topshop have jumped on the bandwagon, and skirts over trousers – which hopefully everyone will start calling ‘trouts’ – will be here to stay. Trouts (look, it’s catching on already) will be just another symptom of the fashion world’s toxic obsession with all things 90s grunge.

Tights? Only if they’re laddered! Shorts must be frayed and small enough as to be almost non-existent. If you’re a fan of the longer skirt, please make sure that there is a split up to at least mid thigh, preferably higher. Remember, this isn’t provocative – you’re wearing a beanie. Nothing is provocative if it’s paired with a beanie. Pretty dresses? Of course – but underneath an oversized cardigan with combat boots. Plus the left strap must be inexplicably sliding off your shoulder. Ours is not to question why. Heels must be forsaken for trainers – brands only please. Need inspiration? Rihanna! Cara! Rita Ora! Every ironic r’n’b night in Dalston! Let us all run out and buy ourselves an overpriced 90s-inspired plaid shirt to tie around our waists, lest we look dated. Call me old fashioned, but there’s something that just doesn’t sit right about a regular 34-year-old woman trying to dress like a 21-year-old. Cara Delevignge almost pulls it off when she is bright eyed and radiant, (probably due to a 10 person-strong team), but also misses the mark occasionally. Looking slightly tired and overworked whilst wearing a bomber jacket and a beanie looks less grunge, more haggard – like you’re suffering from a rampant come down. This trend is undeniably risky – even for a top supermodel. Rihanna recently told American Vogue: “If I’m wearing a top, I don’t wear a bra. If I’m wearing a bra, I just wear a bra.” I’m not entirely sure what message she’s trying to get across here, but it certainly doesn’t make me want to take fashion advice from her.

The true grunge of the early 90s was a reaction to mass-produced fashion and expensive labels. It was lazy, messy, often genuinely dirty, and always second-hand. High fashion tried to incorporate it at the time but it never took off. In 1992, Marc Jacobs famously sent a grunge inspired collection on to the Perry Ellis catwalk. Courtney Love admitted she burnt the entire collection which Jacobs kindly sent her – ostensibly because it offended her grunge sensibilities, but it could just as easily have been because she was only accepting gifts with an alcohol percentage of 60% or higher at the time. The collection was never produced, and Perry Ellis fired Jacobs. Heads of fashion houses felt that people would never pay that much money for clothes that looked tattered and old. How wrong they were. The current trend turns the original concept of grunge entirely on its head. Every high street store and ‘streetwear’ label seems to be enjoying a hazy, plaid-tinted love affair with grunge – an often very expensive love affair. London labels like Hardware LDN are making money hand over fist, with a vest top costing around £40. BOY London are making the same heady profits – Jessie J and TOWIE cast members have been spotted in the label, making profits boom. Even Selfridges are cashing in, stocking snapbacks and string vest galore from ‘urban’ levels. The message is clear: it costs a lot of money to look this edgy. Woe betide anyone whose Trapstar beanie is discovered to be a knock-off from Camden Market.

One of the biggest cons is the idea that the new grunge is ‘wearable’. It’s not wearable. This is a trend that expects you to don 90s high-waisted jeans, which automatically make anyone larger than a size 8 look like Judy Finnegan on her day off. This is a trend that asks you to bare your stomach in Britain’s icy winter temperatures. And I, personally, am bored of it.

I think it’s time to give up grunge. All hail the structured jacket! Embrace unladdered tights! There is nothing wrong with fashion being pretty. Let’s give ourselves a short breather before the unrelenting onward march of vintage trends drags us into the early noughties, and we are forced to dig out our parachute trousers and Juicy Couture tracksuits. We’ve earned it.