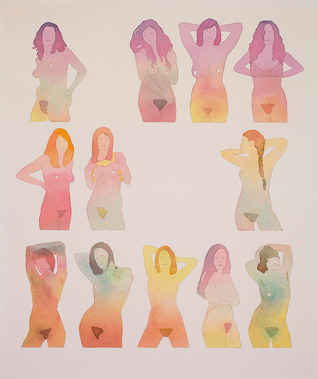 Portland-via-New York artist Dan Gluibizzi (pronounced “glue-busy”)’s solo exhibition “Between Friends” featured his most recent studies, many of which are modeled from images he discovered through Tumblr. Explaining his chosen title, Gluibizzi says,

We live in a world dominated by social media; everything is constantly ‘between friends.’ That term is sort of slightly nefarious, something’s going on, it’s between friends. Or, we’re in this time of data collection and what is private? ‘Oh, this is between friends,’—but everyone knows it’s not between friends. And I think that’s what fascinates me about the adult content that is posted and viewed online. Many of those posted images were [originally] intended for someone specific, perhaps, and now they’re sort of ‘between friends.'”