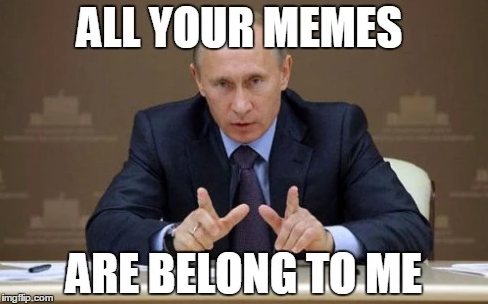 Based on an announcement made this week by Russia’s three-year-old media agency/Internet censor Roskomnadzor, it’s now apparently illegal to publish any Internet meme that depicts a public figure in a way that has nothing to do with his “personality.”

“These ways of using [celebrities’ images] violate the laws governing personal data and harm the honor, dignity and business of public figures,” reads the policy announcement from Roskomnadzor.

To be clear, this isn’t a new law passed by parliament or anything — it’s just a (pretty startling) clarification of existing policy, published to the popular social network Vkontakte. According to Russian media, the announcement came in light of a lawsuit filed by the Russian singer Valeri Syutkin, who sued an irreverent Wikipedia-style culture site over an image macro that paired his picture with some less-than-tasteful lyrics from another artist’s song. On Tuesday, a Moscow judge ruled for Syutkin, prompting the Roskomnadzor to publish an update to its “personal data laws.”
[Source: The Washington Post]