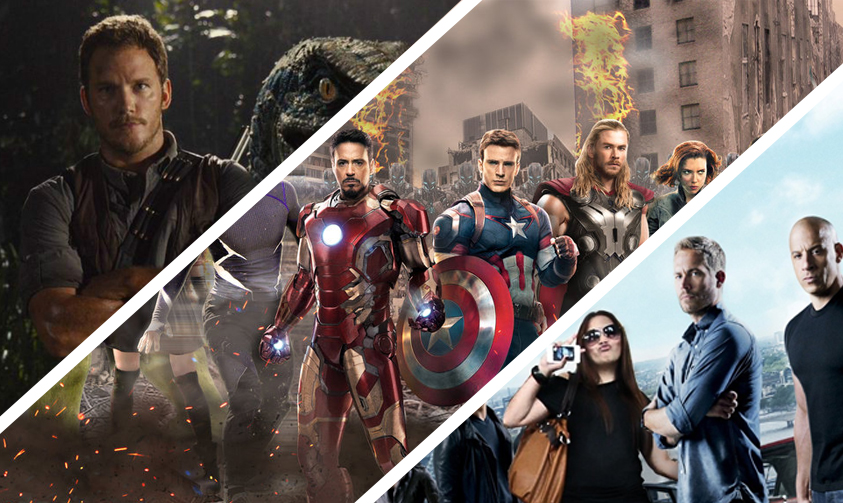 With Fast & Furious 7 currently on release, Avengers: Age of Ultron, Jurassic World, Ted 2 and Minions Movie (which is the spin off from Despicable Me) set to follow in the next few weeks, sequel season is starting early this summer. And with it, we’ll be seeing the good, the bad and the ugly (unfortunately not the 1966 classic starring Clint Eastwood). But for every diabolical sequel, there’s a few that shine like diamonds, and make the wonder we got from the original film live on.

If you were born in the 80s, you know what’s like to be scared of dinosaurs… and would most likely never run into a flimsy bathroom if being chased by one. This year the legacy is back to scare a whole new generation with Jurassic world.

The trailer above successfully recaptures the sense of spectacle and scientific discovery that made the original Jurassic Park a layered and enduring movie experience – setting aside the film’s mind-blowing special effects in favor of selling viewers on the core storyline. Specifically, scientists are once again toying with extinct species (just… why?!).

Jurassic World‘s storyline is a evolution of the original premise. Whereas Jurassic Park (and The Lost World: Jurassic Park) played heavily on mankind’s arrogance in the face of nature and ignoring the dangers of scientific discovery, Jurassic World features a fully-functioning park where the staff are supposed be able to control it’s inhabitants. But as always, people’s reach exceeds their grasp, and innocent lives are, once again, placed at risk. Life will find a way.

There’s a reason this trailer has been viewed 30,000,000 times and it speaks to the little kids in all of us. Joss Whedon returns to write and direct the follow-up to the ultra successful Avengers film, which completes Marvel Studios’ Phase 2 films, which includes Thor: The Dark World, Captain America: Winter Soldier, Edgar Wright’s Ant-Man, and Guardians of the Galaxy.

The plot is thus;  Tony Stark tries to jumpstart a dormant peacekeeping program and things go awry. Don’t want to give away too much of course, but basically, it’s up to the Avengers to stop the villainous ‘Ultron’ from enacting his terrible plans. Expect plot twists, and tightly gripped seats.

There’s been a lot of talk about the seventh (SEVENTH?!) squeal to the original Fast and Furious movie. A lot of it centers around the fact that it became the quickest film ever to reach $1bn globally, and that it would be Paul Walker’s last appearance in a movie… ever. But you have to think there’s something to a franchise that lasts as long as this one (in fact three further sequels have already been green-lit… which means we’re going to get to see Fast & Furious 10 at some point.

Aimed at speed freaks with more sense than lack of caution (otherwise we wouldn’t need to see the film), it follows the motley crew of car theives, ex-cops, heisters, martial artists and frenetic fiends in, you guessed it, fast and furious car chases around major cities.

No list of sequels would be complete without a flashback to 1991 and quite possibly the best sequel of all time. Terminator 2 was James Cameron’s followup to his original hit, with a second installment exploding onto the screen with special-effects that thoroughly justified its vast expense ($100M at the time was a lot of money remember) and greatly improved upon the first film’s potent but rudimentary visual style.

Arguably one of Schwarzenegger’s best roles, the film showcased a scrappy performance from Edward Furlong as the story’s young hero, and was backed by Linda Hamilton’s (again) wild-eyed scampering.

A thriller that boosted a billion “I’ll be back” recitations and weird / ominous thumbs-ups, watching Terminator 2 will get your all geared up and ready to hit the cinema for the sequels above.

Win 2 tickets to the theatre with CineWorld

CineWorld wants you to get out there this summer and experience the enduring (and in the Fast & Furious’ case, never-ending) magic of your favourite sequel. And luckily, they’re giving away two free tickets to do so! All you have to do is click below and Tweet to our Twitter account what your favourite sequel is by May 5th when we’ll pick a winner and let you know you’ve won!

[Tweet “@COMEINTOLAND My favourite sequel of all time is [BLANK].”]