New digital tattoo lets you control devices with your mind 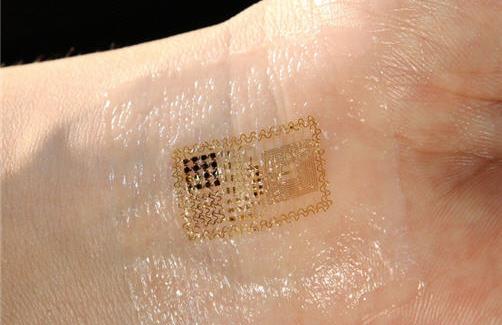 For £79, anyone can buy a headset that reads the electrical activity of their brain. It’s called an electroencephalogram, or EEG, and you can use it to control devices with the power of your mind. But there’s a drawback: they don’t work when the wearer is moving and they look silly, so no one wants to wear them.

The solution could be a kind of EEG system that does away with the cumbersome electrodes, annoying gels and wires of its predecessors, replacing them with a flexible electronic skin that conforms to the body. It promises to let us monitor our brains discreetly 24 hours a day, and can be worn continuously for two weeks, staying put whether you’re swimming, running or sleeping.

Comprising just a small patch of gold electrodes on and behind the ear, it beats the existing tech, described by Rogers as a “rat’s nest of wires attached to devices that interface to the skin with tape and gels and bulky metallic objects”.

Although Hidden EEG can’t rival the precision of the keyboard and mouse from your desktop computer, it is good for controlling systems in a more passive manner. Instead, it might start a coffee pot brewing in the morning when your brain activity implies you’re waking up. Or, if the device reads that you’re in a highly focused state, it could tell your phone to silence any notifications.

“What we need is to measure EEG unobtrusively, invisibly,” says Stefan Debener of the University of Oldenburg in Germany, “this is exactly what you want,” he says. “You want tech that merges with the user.”

Debener is working on a way to measure the attention of a hearing aid user through EEG, then tune the hearing aid in to the voice they are concentrating on. Modern hearing aids can already focus on a single source in a noisy environment, but with EEG, they would be able to detect what their wearer wants to listen to.

“The limitation of EEG so far has been that we didn’t have the technology to study the brain in nature non-invasively,” says Debener. “This is a huge limitation. It’s very hard to tell how decisions are made in complex environments. If you could do this with EEG on the street, driving a car, that would make a big difference.”