When fashion has offended religion

By @comeintoland IN FASHION NSFW 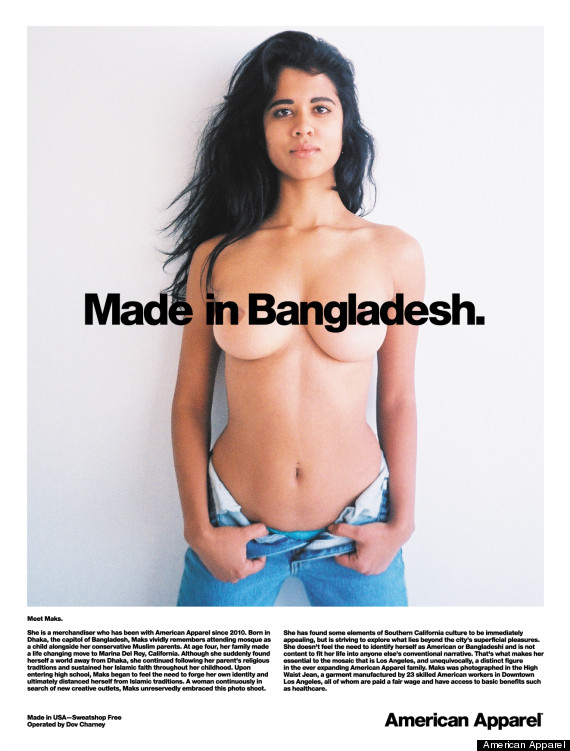 American Apparel, the Californian clothing brand well-known for its provocative marketing campaigns and has been turning heads for a while, while raising more than a few eyebrows with its publicity stunts.

Why? Another half-naked model cavorting on a bed legs akimbo? Yawn, seen it, and no. The attention-seeking brand has this time gone one better and featured not only a topless woman but one emblazoned with the words “Made in Bangladesh”.

The problem? The fact that the model in question, called Maks, was bought up as a Muslim. And while the advert is an attempt to showcase American Apparel’s altruistic side, drawing attention to its fair working policies, the image of naked Maks and allusion to her previous life in Bangladesh – she moved to the US at the age of four and practiced Islam until her teenage years –  hasn’t been particularly well received by the world media.  And? Islam doesn’t take too kindly to brash, public displays of nudity. Most faiths are generally adverse to nudity + faith + materialism, but Islam’s traditions surrounding women wearing the niqab or burka is well documented. With more nudity in its collective marketing campaigns than clothing on sale American Apparel is now famous for its high-sexualised advertisement images. How can one forget Trudy who last season rolled around on a bed in an AA sweater devoid of underwear (modesty marginally intact), which, unsurprisingly didn’t go down well with the Advertising Standards Agency who deemed the images ‘gratutious’ and demeaning.

It appears it takes an awful lot to shock the modern-day consumer, and sincere and irrepressible anger only seems to rear its ugly head by very extreme and unexpected (see Tom Ford For Men fragrance). That said, there have dozens of moments over the past 15 or so years when the fashion industry has crossed the line of propriety and respect – and inevitably left just a few members of religious communities across the globe seething.

So all of this seemingly offensive fashion material got us at CIL thinking about other notoriously controversial ad campaigns fashion has toyed with, and those designers who have cavorted with religious symbols and practices to the point of blasphemy. So here’s a run down of the top ten offenders of sacrilegious fashion. Perhaps most memorably was British-Cypriot designer Hussein Chalayan’s Burka ‘In Between’ collection from 1996 when a line-up of models wore burkas of varying length: floor-length to just the face being covered, exposing the naked model underneath. Chalayan’s avant-garde designs have not always been so fundamentalist, but they are always radical and eye catching – they have included a dress made of bubbles, one that transformed into a table and another colour-changing light dress created with the aid of the same animatronics team that worked on Harry Potter and the Prisoner of Azkaban.

John Galliano – ever the flamboyant designer, he has never shied away from making waves. When he isn’t offending the entire Jewish people with his drunken, anti-Semitic remarks, he’s sending male models down the catwalk in the image of Christianity’s favourite bearded, sandal-wearing carpenter, Jesus Christ Himself. The former Dior chief designer has also sent models down the catwalk with faces painted shades of turquoise and green dressed in fantastical Hindu deitie-inspired ensembles. Some would call that diverse.

Another high-street brand with a penchant for publicity stunts, Benetton have released many an offensive advert. In 1991 the Milanese-born company released an ad featuring a priest in a rather close embrace with a nun and then went on to upset the Catholic church again in 2012 with an advert depicting the Pope Benedict XVI kissing a Muslim leader. The ‘Unhate’ campaign posters were later revoked after The Vatican took legal action against the Italian fashion house, who also later apologised for upsetting his holiness. Diesel’s 2013 denim niqab received mixed reviews. Some liked the diversity implied from using a fashion model, contemporary styling and traditional religious article of clothing. One of Diesel’s marketing execs suggested the feedback concerning the ad’s inappropriate use of Islamic clothing on a white Russian model, who also happened to be showing a lot of skin underneath the niqab, was a good thing; people were asking questions about what culture, religion and clothing mean. For others, using such a symbolic, meaningful headpiece out of context was downright disrespectful. The girl had some pretty bad-ass tattoos though.

French designer Jean Paul Gaultier’s designs have regularly been frowned upon from outside the fashion world for their sexualised and iconoclastic nature. JPG has often appropriated religious imagery including halos, nuns habits and the mother Mary, interweaving them with fetishist masks and sadomasochistic costume.

Versace was forced to remove t-shirts printed with “the devil made me do it” from its shelves in 2003 after receiving numerous complaints. The Italian fashion house in 1997, then headed by founder Gianni again took the now omnipresent crucifix aplenty, vamping it up with knee-length stocking boots and leather. Recently, The Archbishop of Canterbury has criticised fashion’s exploitation of the cross saying it has “emptied” the symbol of its meaning.

Dolce & Gabbana have constantly borrowed from the Catholic faith for collection using sacred mosaics of religious figures, rosaries and appropriation of the crucifix. Similarly, the mosaics used in full-translational form for the D&G autumn/winter 2014 collection included the depiction of St. Agatha, a saint predominately known for having her breasts cut off before she was martyred. “I personally would feel very odd wearing any body covering that had St. Agatha on it,” Canadian “culture-vulture” at St. Auginstine’s Seminary, Toronto, Fr. John-Mark Missio said. Hmmm… me too.

Earlier this year Swedish retail giant H&M has withdrawn a line of men’s vests after it received complaints that one of its new spring lines was anti-Semitic. The – admittedly rather ugly – grubby white vest features a skull smack-bang in the middle of what looks suspiciously like Jewish symbol, the Star of David. The anti-Semitism group Community Security Trust admitted designers may not have meant to cause offence but said the design alluded to anti-Semitism or neo-Nazi clobber.

Let’s not forget the true fiends of the fashion world, the editors who propagate cultural appropriation on their pages in the name of art. In spring 2010, Purple Fashion Magazine – shot by Terry Richardson – chose to put none other than Lindsay Lohan on the front cover arms spread with a crown of thorns on her head. AnOther magazine painted Michelle Williams’ face red and styled her hair in Pocahontas plaits and feathers for their spring/summer 2013 publication. Members of the Native American community were understandably outraged. And in 2012 for its spring ‘Fashion Bible’ edition, W magazine put Kate Moss as the Virgin Mary – innocent on the cover, holding a crucifix between her legs on the inside pages.