Lorde’s tribute to meeting David Bowie for the first time 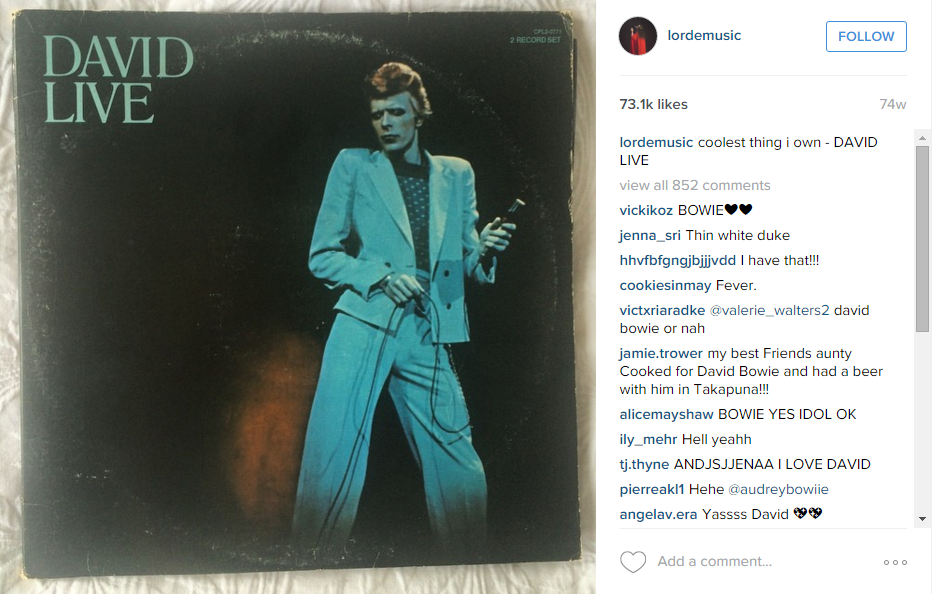 Lorde recounts her first meeting with the mystical rock and roll alien that is David Bowie who touched all of our lives.

When a hero dies, everyone wants a quote. I woke up this morning with a tender head from tears and that big red cup of Japanese whiskey, gulped last night just after the news came. People were already asking me what I thought. It feels kind of garish to talk about oneself at a time like this, when the thing that has happened is so distinctly world-sized. But everything I’ve read or seen since the news has been deeply intrinsic in tone, almost selfish, like therapy. That’s who he was to all of us. He was a piece of bright pleated silk we could stretch out or fold up small inside ourselves when we needed to.

Mr. Bowie, I guess right now we have to hang this thing up for a minute.

The night I met him I played at an expensive Vogue benefit with a lot of fresh flowers, honouring Tilda. I was not quite seventeen, America was very new to me, and I was distinctly uneasy and distrustful toward everything happening in my life that was putting me in these flat-voiced, narrow-eyed, champagneish rooms. I played my three songs, thrashing and twitching in platform boots. Afterward, Anna clasped my hand and said “David wants to meet you,” and led me through people and round tables with candles and glasses and louder and louder talk, and he was there.

I’ve never met a hero of mine and liked it. It just sucks, the pressure is too huge, you can’t enjoy it. David was different. I’ll never forget the caressing of our hands as we spoke, or the light in his eyes. That night something changed in me — I felt a calmness grow, a sureness. I think in those brief moments, he heralded me into my next new life, an old rock and roll alien angel in a perfect grey suit. I realised everything I’d ever done, or would do from then on, would be done like maybe he was watching. I realised I was proud of my spiky strangeness because he had been proud of his. And I know I’m never going to stop learning dances, brand new dances.

It’s not going to change, how we feel about him. For the rest of our lives, we’ll always be crashing in that same car.