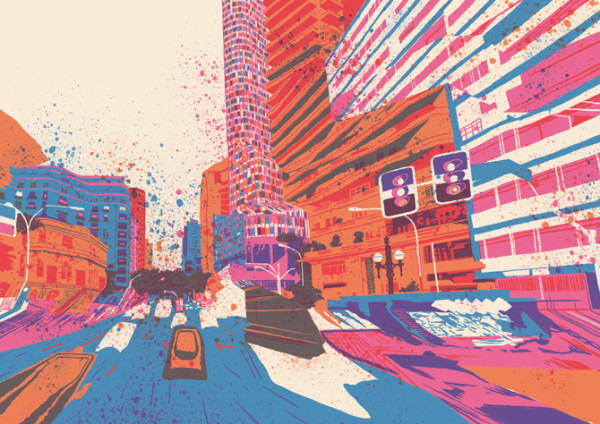 Using screenshots from Google Street View, Brazilian illustrator and printmaker Zansky creates painterly images that are exploding with his signature colorful style. His artful transformation of each Street View scene revolves around the concept of “exploration without knowing the destination.”

“Before spinning any ‘wheel of fortune,’ there is a starting point,” Zansky tells The Creators Project. “Using Google Street View, I pick a random spot and start exploring. Each step in a new direction is captured to be used as a reference. Then, those screen captures are reinterpreted using three colors. The results are figurative landscapes that look like abstractions with a psychedelic feeling.”

The project, called Fortuna, is an instructive display of making the real world into the digital, then transforming it back into analog. Fortuna is being released in a number of tricolor prints, including 80 copies printed on risograph and a limited number of screen-printed posters. After each is complete the original illustration is erased, making it impossible to recreate.